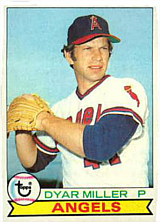 Dyar Miller enjoyed a solid seven-year career as a relief pitcher between 1975 and 1981. Miller's career wasn't relatively short because he hung them up early, but because he broke into the majors late, at 29 years old. He was buried in the minor leagues by the Baltimore Orioles' astounding pitching talent in the early to mid 1970s. With guys like Jim Palmer, Mike Flanagan, Mike Cuellar, Pat Dobson, Doyle Alexander, Mike Torrez and Ross Grimsley gracing the mound in Baltimore, there weren't many roster spots available coming out of spring training.

For example, Miller's 12-10 record, and 3.23 ERA in AA in 1970 was not enough to earn him a promotion to AAA the following season. Similar years followed, and he was 27 before earning a spot in AAA, where he put together two solid seasons, but still languished. He made the most of his promotion once it came, giving the Orioles two-plus solid years of relief work before going over to the California Angels, and later the New York Mets (after an unsuccessful 10 game stint with the Toronto Blue Jays).

The 1981 baseball strike seems to have precipitated the end of Miller's career, even though he was still pitching very well at the time. He worked on his Indiana farm during the strike, according to a 1981 New York Times article, and while he did return to the Mets when the strike ended, he last pitched on September 2nd of that year. In 1989, Dyar Miller was a player/coach for the Orlando Juice of the Senior Professional Baseball Association. In 7 appearances, he had a 3.18 ERA.

After his playing career ended, Miller was a coach with the AAA Louisville Redbirds under manager Jim Fregosi. When Fregosi left Louisville to become the Chicago White Sox manager in 1986, Miller briefly became the Redbirds' manager. Miller was a member of the Chicago White Sox coaching staff in 1987 and 1988. He was a coach for the Columbus Indians in 1991, Colorado Springs Sky Sox in 1992, and Charlotte Knights in 1993-1994.

He worked in the St. Louis Cardinals organization from 1995 to 2012, including the Louisville Redbirds in 1995-1996 and the Memphis Redbirds in 2001-2007. In 2011 he was the Cardinals minor league pitching coordinator, then in 2012 was named the Cardinals' major league bullpen coach, holding the position for only one season.

Miller became pitching coach of the Fresno Grizzlies in 2016-2018.