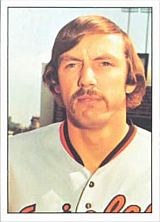 Alexander was selected by the Los Angeles Dodgers in the ninth round of the 1968 amateur draft and reached the majors three summers later, going 6-6 with a 3.80 ERA in 17 games with LA. He was traded to the Baltimore Orioles the following winter as part of the trade that brought Frank Robinson to the Dodgers. He spent four and a half years with the O's as a member of a pitching staff that included Jim Palmer and Mike Cuellar but only managed one winning season despite the fact that Baltimore was consistently one of the best teams in baseball during that time. Midway through the 1976 season, he was shipped to the New York Yankees as part of the deal that brought Rick Dempsey, Scott McGregor, and Tippy Martinez to the Orioles.

With the 1976 Yankees, Alexander went 10-5 in 19 starts as the team won the American League pennant for the first time in more than a decade. He started Game 1 of the World Series but gave up 5 earned runs in 6 innings and took the loss. The Yankees were ultimately swept by the Cincinnati Reds, and Alexander left via free agency after the season. As one of the original class of free agents, he signed a lucrative deal with the Texas Rangers prior to the 1977 season and won 17 games. However, his win totals dropped and his ERA went up in each of the next two years. After the 1979 campaign, he was traded to the Atlanta Braves and after one year there, he was sent to the San Francisco Giants, where he also played a single season. He won 14 games for Atlanta in 1980 and 11 with a 2.90 ERA for San Francisco during the strike-shortened 1981 season.

Alexander was reacquired by the New York Yankees prior to the 1982 season but struggled in a season and a half with the club, going 1-9 with a 6.16 ERA. His performance that season led Yankee owner George Steinbrenner to allegedly remark "I'm afraid some of my players will get hurt playing behind him," in August. After being released in 1983, he caught on with the Toronto Blue Jays and began the most successful run of his career. He won 17 games in 1984 and again in 1985 before being traded back to the Atlanta Braves in 1986. After that season, he was one of the free agents blocked by collusion from changing teams; he had to wait until the beginning of May 1987 to re-sign with the Braves. He would later be awarded monetary damages for being a victim of this tactic.

After just over a year with the Braves, Alexander was traded in 1987 to the Detroit Tigers for a young 22nd round draft pick, John Smoltz. Alexander did what the Tigers wanted and finished the season with a 9-0 record and an ERA of 1.53, taking them to the postseason in a close race with the Toronto Blue Jays that went down to the wire. He lost both of his ALCS starts as the Tigers were beaten by the underdog Minnesota Twins (bringing his overall postseason record to 0-5, 8.38 in 6 starts with four different teams). Smoltz, meanwhile, went on to record more than 200 wins and a Cy Young Award in nearly two decades with the Braves and was inducted into the Hall of Fame in 2015.

Alexander continued his hot run at the beginning of 1988, going 8-4 with a 3.15 ERA in the first half and making the All-Star team for the only time in his career. After the break he experienced a bit of a meltdown, going 6-7 with a 6.07 ERA the rest of the way. The poor performance continued in 1989, when he went 6-18 with a 4.44 ERA, leading the American League in losses and home runs allowed. He retired after that season.

Alexander primarily wore number 33 during his career (with Texas and during part of his time with Atlanta and Toronto).