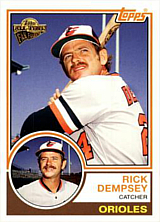 One of baseball's great characters and the son of vaudevillians, Rick Dempsey was fond of stuffing towels under his jersey and doing an impression of Babe Ruth during rain delays. Dempsey would point to the outfield seats, then hit an invisible pitch with an exaggerated swing. He would circle the bases, sliding head first on the wet tarp into each base. It truly was a sight to behold. He called this performance Baseball Soliloquy in Pantomime.

Dempsey was also a versatile athlete. He was a first-rate defensive catcher with a cannon for an arm. At the age of forty-two, he made his pitching debut, pitching twice for the Milwaukee Brewers in the late innings of lopsided games in 1991.

Rick spent most of his career with the Baltimore Orioles and was a four-decade player. He was the MVP of the 1983 World Series. In Game 2, he doubled to drive in the Orioles' first run in a three-run 5th inning, as the Orioles won, 4-1, over the Philadelphia Phillies. In Game 3, he began a two-out rally in the 7th inning with his second double of the day. Dempsey scored the tying run and the Orioles took the 3-2 lead that would be the final score. In the decisive Game 5, Dempsey homered to lead off the 3rd inning, giving the Orioles a 2-0 lead, and doubled and scored in the 5th to close the scoring at 5-0. He won a second World Series title with the Los Angeles Dodgers in 1988, appearing in two games against the Oakland Athletics.

Drafted out of high school by the Minnesota Twins in the 15th round of the 1967 amateur draft, he made his debut in the majors at the end of the 1969 season, despite missing four months because of military service. He hit .364 for the Wisconsin Rapids Twins that year, prompting the call-up; he would never again hit as well, but his superior defense meant that he was back for a cup of coffee with the Twins in both 1970 and 1971 after spending the bulk of those two seasons with the Charlotte Hornets of the Southern League. In 1972, he got a more extended look, getting into 25 games and hitting .200 in 40 at-bats. After the season, he was traded to the New York Yankees in return for Danny Walton, but he faced another obstacle in the person of Thurman Munson, who was now entrenched as the Yankees' starting catcher. Dempsey was his backup from 1973, in which he spent most of the year with the Triple A Syracuse Chiefs, to the start of the 1976 season, with only limited opportunities to play. His busiest season saw him get into 71 games with 170 at-bats in 1975. With Munson catching most of the time, he saw some action in the outfield and at DH in addition to the few times he could play his natural position.

He caught his big break when he was included in a multi-player swap between the Yankees and the Orioles on June 15, 1976. He and four pitchers (Tippy Martinez, Rudy May, Scott McGregor and Dave Pagan) headed to Baltimore in return for a similar package of talent: Ps Doyle Alexander, Ken Holtzman, Grant Jackson and Jimmy Freeman and C Elrod Hendricks. The deal helped both teams and Dempsey finally got a chance to play regularly. From 1978 to 1986, he played in over 100 games every year, except for the strike-shortened 1981 season. He did not hit much, but he contributed with his strong arm and his ability to handle pitchers. Manager Earl Weaver always had plenty of pinch-hitters around he could use to bat in his place if need be; the relationship between skipper and catcher was not always easy, as Weaver used Dempsey as his scapegoat when he wanted to pass a message to all of his players. While Dempsey constantly worked on his hitting, even trying to become a switch-hitter for a brief spell, Weaver made sure to have a strong-hitting catcher around for times when he needed offense from the position (Dan Graham, Floyd Rayford and Joe Nolan all fit that bill). So little was expected of Rick's bat that when he started the 1979 season on a tear, he was told by a reporter that he was among the league leaders in slugging percentage. "I did not know I had a slugging percentage", was his tongue-in-cheek reply. Until the end of the 1983 season, his personal best in a season was 9 homers and 41 RBI. He drew his share of walks, and from 1984 to 1986, he hit over 10 homers each year. He ended up catching 1,230 games for the Orioles, the most in franchise history.

In 1987, he signed as a free agent with the Cleveland Indians, but his season ended early when he was bowled over by Bo Jackson in a home plate collision on July 21st, breaking his thumb. He joined the Los Angeles Dodgers in 1988, in time to serve as the backup to Mike Scioscia for their unlikely World Series triumph. On August 23, 1989, he homered off Dennis Martinez of the Montreal Expos in the 22nd inning at Stade Olympique, breaking a scoreless tie and providing the only run in what was the longest game in Expos history. After a third season with L.A. in 1990, he played for the Milwaukee Brewers in 1991, when he became a four-decade player, then finished his career back with the Orioles for 8 games in 1992; he failed to make the team out of spring training, but hung around and was activated when the O's needed catching help in June. He was activated again to play one final game on September 27th, catching a couple of innings and grounding out in his final at-bat against the Boston Red Sox. Overall, he played 1,766 games in 24 seasons, hitting .233 with 96 homers and 471 RBI, and playing 1,633 games as a catcher - the 21st highest total of all-time, not bad for someone who spent half of his career as a backup. As shown by his 1983 World Series MVP award Dempsey was at his best in big games - across three years he saw playoff action he combined to bat .303 while slugging .515, levels well above his career norms.

Along with Tim McCarver and Carlton Fisk, Dempsey is one of only three catchers to play in the majors in four decades. After his playing career ended, he managed in the minors with the hope of eventually landing a big league job, but it did not happen. Most recently, he has been a big league coach with the Los Angeles Dodgers in 1999 and 2000 and the Baltimore Orioles from 2002 to 2006. He also spent the 2001 season as an Orioles television broadcaster. Dempsey remained a familiar face to Orioles fans, serving as an analyst and occasional television broadcaster on MASN for the Orioles from 2007 through 2020.

Dempsey is the uncle of fellow big league catcher Gregg Zaun. Additionally his brother, Pat, was a minor league catcher, as was his son, John.