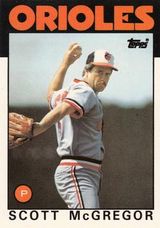 Scott McGregor had a successful pitching career of 13 years in the major leagues, all with the Baltimore Orioles. He had a lifetime record of 138-108, with a record of 20-8 in 1980. He pitched 34 innings in two World Series with an ERA of 2.12. An All-Star in 1981, he was twice sixth in the Cy Young Award voting.

After retiring as a player, McGregor worked as a minister in the Baltimore area before returning to baseball as a coach.