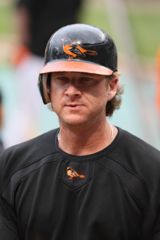 Zaun went 4 for 22 as the USA's catcher in the 1989 World Junior Championship but drew 7 walks, homered twice and scored 7 runs in 7 games to help them win a Gold Medal.

A lifetime back-up catcher, Zaun caught a big break that extended his career in 2004. He went to that year's spring training with the Montreal Expos, where he seemed to have earned a spot as Brian Schneider's back-up. However, he was released on the last day of spring training when, in a strange move, the Expos traded with the Texas Rangers for C Einar Diaz, giving up P Chris Young in the process. However, Zaun landed on his feet as he was picked up by the Toronto Blue Jays, then became the starting catcher after a string of injuries. He had his best season, hitting .269 in 109 games, then continue to play well as the Blue Jays' starting catcher over the next four seasons. He had three seasons of 10 or more homers, twice hit 24 doubles, and drove in a career-high 61 runs in 2005. 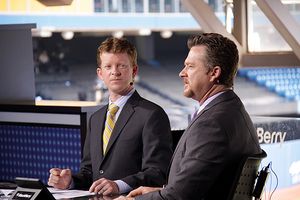 Late in his career, Zaun worked as a guest announcer for World Series broadcasts on Rogers Sportsnet in Canada. He was injured early in the 2010 season while playing for the Milwaukee Brewers. He attempted a comeback in spring training of 2011, but announced his retirement on March 7th. He ended his career with a .252 batting average, a .344 OBP, having played in 1232 games. The BR's Offensive Similarity scores put him right up there with three other Toronto catchers, Ernie Whitt with 928, Greg Myers with 926, and Pat Borders with 904. He is also close to his Uncle Rick, who has a 902 similarity score.

Post-baseball, he took on a full-time job providing analysis and pre- and post-game reviews on Sportsnet, teaming up with Jamie Campbell. He developed an image by wearing particularly flashy suits, reminiscent of hockey broadcasting legend Don Cherry. In November of 2017, however, Sportsnet announced that he had been fired for "inappropriate behavior and comments" toward female employees. The network had apparently received complaints from multiple female employees regarding his behavior. The firing came amidst a wave of dismissals for similar reasons across the entertainment industry in North America.