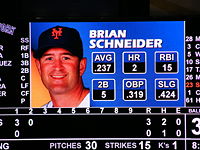 Brian Schneider announced his retirement from Major League Baseball on January 29, 2013. He then went to Europe and visited U.S. Army troops in Germany as part of "Spring Training to the Troops", a three-day tour honoring Service members, veterans and their families. [1]

Although he was not particularly known for his power, Schneider holds the record for most homers hit at Hiram Bithorn Stadium, in San Juan, Puerto Rico, with 6.

Schneider was a minor league manager with the Jupiter Hammerheads in 2014 and 2015. He was appointed catching coach for the Miami Marlins for 2016, staying until the end of the 2019 season. In 2020 he joined the Mets as the quality control coach.