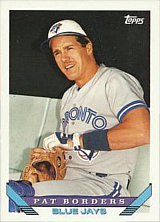 Venerable catcher Pat Borders was drafted in the sixth round of the 1982 amateur draft and signed as a third baseman. He played 17 years in the big leagues for nine different teams. He won two World Series championships in succession with the Toronto Blue Jays, in 1992 and 1993. In the 1992 Series, he hit .450 with one home run and was named the MVP of the series. On September 2, 1990, he caught the only no-hitter in Blue Jays history, thrown by Dave Stieb.

Following the 1994 season, Borders became a baseball nomad, seeing time with nine teams over the ensuing 11 seasons. He spent the 2000 season solely in the minor leagues and played on the United States Olympic baseball team that won a gold medal at the Sydney Games. On July 27, 2005, Borders and starting pitcher Jamie Moyer became the oldest starting battery in major league history when they took the field for the Seattle Mariners. Both were 42 years old at the time for a combined age of 84. While this was Borders' final game, Moyer continued his career into the 2012 season at the age of 49.

Borders is one of four men to have won a World Series ring and an Olympic gold medal, along with Doug Mientkiewicz, Orlando Hernández and José Contreras.

In 2011, Pat became a coach for the GCL Braves. He moved to high school coaching in the spring of 2012 as an assistant coach for the Winter Haven High School Blue Devils. He was promoted to head coach in May, 2012 and stayed in that role through the 2016 season. In 2015, he was named manager of the Williamsport Crosscutters, the short-season Single A team of the Philadelphia Phillies. The two roles conflicted in terms of time commitment so Borders chose to remain with the Phillies and resigned from Winter Haven. Borders was scheduled to be manager for the Clearwater Threshers in 2020 before the season was cancelled due to COVID-19.