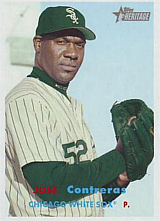 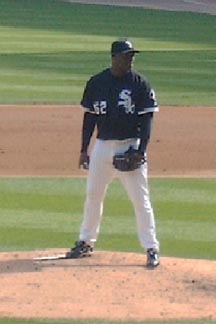 José Contreras was a pitcher who saw eleven seasons of action in the big leagues. Originally a prized acquisition of the New York Yankees, it was with the Chicago White Sox he saw his greatest success, making an All-Star team as well as winning a World Series as part of their very effective starting corps in 2005.

Contreras was a star in Cuba. He fanned 12 with 5 shutout innings in the 1995 Intercontinental Cup to help Cuba win the Gold. He allowed 5 runs in 5 innings despite 8 strikeouts in the 1997 World Port Tournament. In the 1997 Intercontinental Cup, Contreras was 2-0 with 1 save and a 2.61 ERA. He allowed 13 hits and struck out 23 in 20 1/3 innings. He tied Pedro Luis Lazo, Abel Madera, Koji Uehara and Akio Shimizu for most wins in the tournament. In the Gold Medal game, he allowed 4 runs in 6 1/3 innings of relief after replacing Ciro Licea in a 11-2 romp by Japan. He was the best of the four hurlers Cuba tried, the first Gold Medal game they had dropped in 15 years. He was the top pitcher in the 1998 Haarlem Baseball Week. He was an All-Star pitcher in the 1998 Baseball World Cup, beating Byung-hyun Kim in the finale and going 2-0 with a 0.53 ERA and 28 strikeouts in 17 innings, allowing 8 hits and 3 walks for the tourney. He tied for the tourney lead in wins, was 4th in ERA and tied Kim for second in strikeouts, trailing Koji Uehara. Contreras was 2-0 in the 1998 Central American and Caribbean Games but had the worst ERA on the Cuban staff, 4.61, as they won Gold.

In the 1999 Pan American Games, Contreras beat the Dominican national team, 3-1, in the quarterfinals. He came back on one day's rest to shut down Team USA in the Gold Medal game. He struck out 13 and allowed only 4 hits and 1 run in 8 innings against the first Team USA to feature pro players. He won, 5-1, over Brad Penny. In March, a 13-strikeout performance against the Baltimore Orioles in an exhibition series put him on the radar of MLB scouts. But first, he would win an Olympic silver medal with Cuba in the 2000 Olympics. In the 2001 Baseball World Cup, he allowed only 11 hits and 4 walks while striking out 22 in 21 2/3 innings. He went 2-0 with a 0.00 ERA, allowing only 1 unearned run. He one-hit a Canadian national team which featured six position players who would appear in the majors - Aaron Guiel, Rich Butler, Justin Morneau, Scott Thorman, Ryan Radmanovich and Kevin Nicholson plus AAA player Todd Betts. In the semifinals, he pitched 10 2/3 innings of one-run ball against Japan to hand that club its first loss of the Cup. The only run came in the 1st inning when Tadahito Iguchi singled in Hirokazu Ibata; Contreras whiffed 11 in that game. He joined Jason Stanford as the tourney's All-Star pitchers, having led in ERA and finished third in strikeouts, tying Shugo Fujii and trailing Chih-Chia Chang and Roger Deago.

In October 2002, he defected from Cuba during the Americas series in Mexico. After receiving offers from several major league clubs, he signed a four-year deal with the New York Yankees on the day after Christmas. Immediately thrown in the mix, he spent much of the first two months of the 2003 season as a reliever, with a ghastly ERA of 8.74 in 8 appearances. He put together two very good starts before finding himself on the injured list until August. On the season, he finished 7-2, 3.30 with 72 strikeouts in 71 innings. In the postseason, he was in the bullpen, struggling to a 5.73 ERA but with 17 strikeouts in 11 innings encompassing three rounds as the Yankees lost the 2003 World Series to the Florida Marlins. He was a full-time starter with the Yanks in 2004 and was not up to the standard they were hoping for, spending nearly three weeks in the minors while trudging to a 8-5, 5.64 line in 18 starts. At the trading deadline, he was unloaded to the Chicago White Sox for veteran Esteban Loaiza.

José was inconsistent in his first partial season on the south side of Chicago. Overall, in 31 starts between the two teams, he was 13-9 with a 5.30 ERA. In 2005 with the Sox, he had the finest year of his big league career. He had a 4-5 record at the All-Star break, but went 11-2 from then on, winning his last eight decisions. Thanks to countryman and teammate Orlando Hernandez, he altered his arm angle to strong results. He finished the season with a career best 15 wins (15-7) and a 3.61 ERA in a career best 32 starts. Contreras carried his fine performance into the postseason, going 3-1 with a 3.09 ERA in four starts and winning Game 1 of the World Series over the Houston Astros. He won both the opening games of the ALDS and the World Series while losing the ALCS opener, bouncing back with a complete game victory in Game 5 to clinch the trip to the Fall Classic.

Prior to 2006, Contreras signed a three-year contract extension. He continued to look like the Sox ace, starting the season 9-0, 3.31 with 71 strikeouts and stretching his regular season win streak to 17 games, a White Sox record. He made the All-Star team for the first time in his career but was unable to play due to being a Sunday starter two days prior to the game. His victory streak was snapped immediately afterward, on July 14th by the Yankees, while becoming the first man in 30 years to start back-to-back regularly scheduled games. He was 4-9 with a 5.40 ERA after the break, finishing the season with a 13-9, 4.27 record. The next season, 2007, he had his worst year in the majors, losing 17 games (10-17) and putting up a 5.57 ERA. Despite the struggles, he did manage to lead the AL in shutouts with 2, besting the Minnesota Twins with a five-hitter on May 10th and the Kansas City Royals with another five-hitter on September 19th. He had an adequate 7-6, 4.54 line in 20 starts in 2008 before rupturing his Achilles tendon in August, ending his season. In 2009, he bottomed out hard, spending a month back in the minors while going 5-13 with a 5.42 ERA in 21 starts. Following the trading deadline, he went to the Colorado Rockies for a minor leaguer (Brandon Hynick) and had a good 1-0, 1.59 record in 7 games (2 starts). He pitched twice in the NLDS against the Philadelphia Phillies, giving up a run in 2 innings.

Before the 2010 season, Contreras signed as a free agent with the Philadelphia Phillies and pitched very well out of the bullpen. In 64 games as a righty specialist, he went 6-4, 3.34 with 4 saves, striking out 57 opponents in 56 2/3 innings. He pitched four times in the postseason, giving up 1 hit and nothing else in 4 innings while striking out 4. At the start of the 2011 season, manager Charlie Manuel used him as his closer with Brad Lidge unavailable, and he picked up 5 saves quickly without giving up an earned run. He was placed on the disabled list after registering his 5th save on April 21st, and only pitched 9 more times that year, getting hit hard. By then, Ryan Madson had taken over as closer, and Contreras made short appearances in the middle innings. He ended the year with no record and a 3.86 ERA in 17 games and 14 innings, his last appearance coming on June 19th. He was back on the mound to start the 2012 season, making 17 appearances with a 1-0, 5.27 record. He struck out 15 with only 3 walks in 13 2/3 innings. His season ended brutally on June 1st, when he crumpled to the ground in pain after making a pitch and had to be removed from the game. An MRI confirmed that he had torn a ligament and tendon in his elbow, requiring surgery and a long rehab to pitch again. The Phillies declined to pick up his option after the season, making him a free agent.

In 2013, José signed with the Pittsburgh Pirates. After minor league rehab, he appeared for his fifth big league team at the age of 41, giving up 5 runs in 5 innings. He also pitched for the AAA Indianapolis Indians, putting up an ERA of 0.93 in 16 games. He asked for his release and moved to the Boston Red Sox in mid-season, but only pitched in AAA with a 6.52 ERA in 6 games for the Pawtucket Red Sox. He spent spring training 2014 with the Texas Rangers and last pitched in the Mexican League in 2016.

Contreras was allowed to return for a visit to his homeland in January 2013, being the first athlete to take advantage of a new immigration law designed to make it easier for former defectors to visit their families, a sign that the rigid ideology that for five decades had branded defectors as traitors was showing cracks. He received a hero's welcome as hundreds of fans turned out in Pinar del Rio to have their pictures taken with him; he had primarily made the trip to visit his ailing mother. As he explained, when his father died one year after his defection, "I had to attend the funeral by phone". Fortunately, his mother's health was improving after his visit.