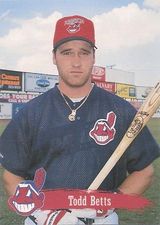 Todd Betts was a baseball fan in a hockey-loving area of Canada. He was on the 1991 Canadian National Junior Team that won the 1991 World Junior Championship and was inducted as a unit into the Canadian Baseball Hall of Fame. Betts' two-run double was a big blow in the 5-2 win over Taiwan in the title game. To develop his baseball skills, he chose a college in the US. After his junior college career ended, he was drafted in the 14th round of the 1993 amateur draft by the Cleveland Indians. He began his professional career with the Burlington Indians, leading the league's third basemen in fielding (.912) and batting .232/~.355/.411, outhitting the man on the other corner of the infield, Richie Sexson. Betts moved up to the Watertown Indians in 1994 and had a fine year at .326/.460/.555. He had 54 walks and only 29 strikeouts in 65 games, showing a very good eye at the plate. Todd tied for the New York-Penn League lead with 30 extra-base hits, was fourth in average, led in OBP, was only 12 points behind slugging leader Jeff Ladd and made the league All-Star team as a DH. Chris Truby beat him out for the MVP award.

In 2001, Todd finally got an extended look at AAA. The 27/28-year-old signed with the Seattle Mariners and was assigned to the Tacoma Rainiers, where he hit a fine .308/.372/.490 with 40 doubles and a team-high 87 runs. He was also playing mostly first base for the first time in his career. Betts hit third for the PCL in the Triple-A All-Star Game, going 1 for 3 with a run and RBI. Betts made the PCL All-Star team at first base at year's end. In the 2001 Baseball World Cup, Betts hit .261/.393/.261 and fielded 1.000 as the third baseman for the Canadian national team, outhitting teammates like Jason Bay, Justin Morneau and Aaron Guiel.

A minor league journeyman now, Betts moved to the Boston Red Sox chain in 2002 as insurance and hit .291/.392/.440 with the Pawtucket Red Sox, leading the team in OBP, beating out Freddy Sanchez by 42 points. The next year, had "pretty much the best time I've had in my whole baseball career." Playing for the Yakult Swallows, he produced at a .287/.329/.461 clip, failing to draw walks regularly for the first time in his career (22 BB, 92 K in 438 PA). He did not provide the power or OBP of his predecessor, Roberto Petagine, and was replaced the next season by Ken Suzuki.

In 2004, Betts returned to the US, joining the New York Yankees chain and playing for the Columbus Clippers. Now past 30, he hit .270/.330/.396 as a backup to Andy Phillips. He also played on the Canadian team that finished fourth in the 2004 Olympics. The next year, he ventured into the home for over-the-hill career minor leaguers, the independent leagues. There, Todd hit .269/~.330/.457 with 36 doubles and 15 homers for the Somerset Patriots.

2006 found Todd in a fourth country, Taiwan, joining the La New Bears of the Chinese Professional Baseball League. He hit .343 with 37 RBI in 49 games to help the team to the first-half title and become a fan favorite, but then was sidelined by vertebra injuries. After two months of back rehabilitation and no return to action, he was released.

Sources include 1994-2006 Baseball Almanacs, 1995 Baseball Guide, Japanesebaseball.com, Japanbaseballdaily.com by Gary Garland, A profile of Betts on the Somerset Patriots site, IBAF website and Thebaseballcube.com for OBP for 2005, Canadian Hall of Fame