The Intercounty Baseball League was founded in 1919. The league plays in central and southern Ontario, and currently has nine teams. As of 2009, these teams are the Barrie Baycats, the Brantford Red Sox, the Guelph Royals, the Hamilton Thunderbirds, the Kitchener Panthers, the London Majors, the Missisauga Twins, the Oshawa Dodgers and the Toronto Maple Leafs. At different times, there were as few as four teams, and as many as 10 teams. The year 1957 is regarded as the start of the “modern era” in the IBL.

These teams play annually for the IBL Championship, and are awarded the Jack and Lynne Dominico Trophy (named for the longtime husband and wife owners of the Toronto Maple Leafs, and longstanding supporters of the league). No championship was awarded during 1942-1945, due to the Second World War. The league is believed to be the oldest amateur men's league in Canada.

The IBL is an independent league, not affiliated with MLB or any other baseball organization. The league consists of amateur male athletes who play a 36 game regular-season schedule, usually running from May to July, spread out among the different teams. Unlike the Majors, teams will not play a full 162 game schedule; on any given day, up to four games are played. Some doubleheaders are played. The league uses the designated hitter rule and also has an All-Star game usually in the last third of the season. IBL teams are allowed to carry 3 import players but not many take advantage of this rule.

Each team has a discrete front office, and the league itself has a Commissioner, a Registrar and a Treasurer/Statistician, along with a Supervisor of Umpires. Players can be signed and released by individual teams, and the League can suspend players for improper behavior. The league operates on a not-for-profit basis, and all staff members are volunteers. [1]

The IBL takes a particularly dim view on fighting, and has the power to suspend players if they act improperly. For example, four players were suspended "following a bench-clearing melee between the rivals" (the Barrie Baycats and the Toronto Maple Leafs) on August 13, 2009 during the 2009 playoffs. [2]

Some games are also televised on the local community cable channel, run by Rogers Cable (part of the same media company that owns the Toronto Blue Jays, although there is no other link between the two teams). The televised games feature announcers and on-screen graphics. Game highlights and results are also featured in local newspapers and on the radio. 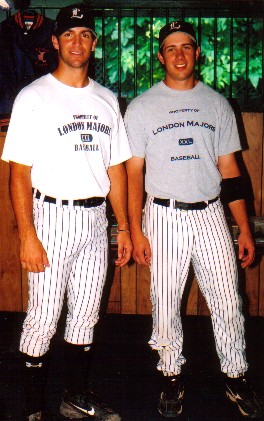 The London Majors play in Labatt Park, built in 1877 and is the oldest continuously used baseball park in the world.[5] The park is designated as an Ontario Heritage Property by the Government of Ontario due to it's age and historical importance. [6] The park was purchased by the Labatt family (owners of the Labatt Breweries) and it was donated to the City of London in 1936 for baseball and recreational use. From 1970-2008, the Majors went 1054-961, good enough for a .523 percentage, and have only won a single championship during that time, in 1975.

The Barrie Baycats play in Barrie Metals Park in Barrie, ON. They joined the league in 2001. From 2001-2008, they went 155-129, a .546 winning percentage. Their mascot is a large cat named "Cool Cat", and he entertains the younger fans during games. The team itself welcomes children under 12 to games with a no-charge admission, and the chance to win prizes during every game. [7]

The Hamilton Cardinals play home games at Bernie Arbour Memorial Stadium in Stoney Creek, ON. From 1971-2008, the team went a dismal 581-1052, for a .356 winning percentage. For that period, they would only win the league championship once, in 1978. In 2008, the team celebrated it 56th year in Hamilton, and was noted for being the second oldest pro or semi-pro sports team in town, right behind the local CFL football team.

The Kitchener Panthers call Jack Couch Park in Kitchener, ON home. From 1970-2008, the team went 1191-867, good enough for a .579 percentage. During that time, they have won the championship seven times (1971, 1973, 1990, 1996, 1998, 2000 and 2001). The team if one of the oldest continuously operating team in Canadian sports history, having fielded a team every single season since 1919. For a one year period in the 1950’s, the team was known as the Kitchener Dutchmen. Many pro players have been with the Panthers, either before or after their time in Organized Baseball including Harry Psutka, Howie Hupp, Bob McKillop, Gary Ebel, Ron Smith, and Scott Medvin. Several Panthers have also played for Team Canada, including Marty Chubb, Randy Curran, Tommy McKenzie and Jamie Pietraszko.

Looking to the future[edit]

The League enjoys a strong fanbase and both players and owners appear happy. There has been some talk of hiring full-time staffers to promote the league, as the limited amount of promotions that are now done are contracted out on an as-needed basis.

The league hopes to expand to 12 teams in the future, and there is some interest from Windsor about joining the League.

The League also hopes to establish a hall of fame at the London ballpark.