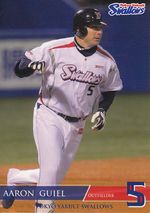 The brother of Jeff Guiel, Aaron Guiel played for the Tokyo Yakult Swallows after his major league career.

Returning to Midland and now playing mostly in the outfield, Aaron hit .329/~.433/.609 in 1997. He homered 22 times and smacked 37 doubles and 7 triples in 116 games, scoring 91 runs and driving in 85. He was third in the Texas League in home runs behind Dan Collier and Fernando Tatis. Guiel led the TL in times hit by pitch (18) and slugging percentage and was 7th in average.

Guiel was traded in late August of 1997 to the San Diego Padres in return for Angelo Encarnacion. He batted .385/~.484/.577 in his 8 games with the Mobile BayBears that year.

In 2000, after spending spring training with the Oakland Athletics, Guiel was let go and signed with the Guerreros de Oaxaca. In 56 games for Oaxaca, he batted .365/~.512/.776 and smashed 22 home runs. He scored almost a run per game (55 runs), drew almost a walk per game (52) and drove in 62, over one per game. That earned him notice from the USA again and he was purchased by the Kansas City Royals.

Guiel was expected to be a starting outfielder for the Royals in 2004, a team many thought to be a strong contender for the postseason. Guiel struggled mightily (a miserable .156/.263/.296 line) and then underwent multiple laser-eye surgeries to correct hazy vision. He also spent time back in Omaha, hitting .310/.438/.621 in 30 games, homering 10 times.

Guiel played for Canada in the 2006 World Baseball Classic, joining Jason Bay and Adam Stern as the regular outfielders. He went 2 for 9 with two walks, six strikeouts, a double, a triple and one run. 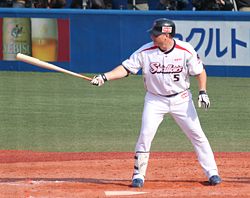 In early 2007, Aaron signed a one-year, $900,000 (US) contract with the Tokyo Yakult Swallows with a club option for a second year. His curly blond hair and gentle behavior earned him the nickname "Angel" from the team's fans. At the All-Star break, he was leading the Swallows with 18 homers and drawing walks but struggling to make contact. He homered in five straight games in September, tying the Yakult record held by Chuck Manuel and Larry Parrish. Guiel finished with a .245/.381/.493 batting line with 35 homers and 88 walks. He was 9th in the Central League in runs (78), tied Yoshinobu Takahashi and Tyrone Woods for second in homers (one behind leader Shuichi Murata), led in times hit by pitch (23), was second in strikeouts (147, trailing only Woods), was second in walks (also behind Woods) and finished 4th in OBP behind Norichika Aoki, Woods and Takahashi.

The Tokyo Yakult Swallows announced in January that they had re-signed Aaron for the 2009 season. His remuneration was not disclosed. He was also on the provisional Canadian roster for the 2009 World Baseball Classic. On June 14th, Guiel hit a grand slam for the 10th straight hit by Yakult in a 14-10 win over the Orix Buffaloes, tying the NPB record; it would be broken when Yasushi Iihara followed with a double.

He was playing in a pre-season game in Japan when a 9.0 earthquake hit the country in March 2011. He was given a few days off to visit his family in Canada following the tragedy. He also suffered from back problems and was to see a specialist in Vancouver at that time (he underwent surgery in October 2010). 2011 marked his fifth year playing for the Swallows.

Guiel announced his retirement at the end of the 2011 NPB season. He rejoined the Royals as an instructor and currently works at the team's minor-league complex in Surprise, Arizona.