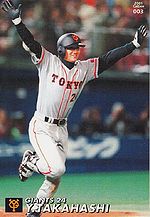 Yoshinobu Takahashi won a Tokyo Big Six University League Triple Crown. He set a league record for home runs in college (the old mark by Koichi Tabuchi had stood for 30 years). He then starred for Japan in the 1997 Intercontinental Cup, hitting .419/.513/1.032 with 3 triples, 4 home runs, 7 walks, 13 runs and 16 RBI in 9 games. He made no errors in right field and had one assist. Takahashi was 4th in the Cup in average (behind Paul Gonzalez, Greg Jelks and Jason Tyner), 4th in homers (behind Jelks, Orestes Kindelan and Gonzalez) and 2nd to Gonzalez in RBI. He made the tournament All-Star outfield alongside Luis Ulacia and Chris Magruder but did not get MVP honors, as those went to Gonzalez. In the Gold Medal game, the left-handed batter was 2 for 5 with 5 RBI and a homer as Japan routed the Cuban national team 11-2 and also had 7 putouts in a busy day on both ends of the field. It was Cuba's first failure to win an international tournament in 15 years.

He was drafted in the first round in 1997 by the Yomiuri Giants; he has been their right fielder since. He had a strong rookie season, batting .300/.356/.496 and winning a Gold Glove and an All-Star spot. He did not win the Central League Rookie of the Year award, though, as Kenshin Kawakami won that trophy.

In '99, Takahashi had arguably his best season to date - .315/.378/.588 with 34 homers, 98 RBI and another Gold Glove (Takahashi is known for his fine throwing arm). He joined outfield teammate Hideki Matsui on his only Best Nine team to date.

In 2002 Takahashi had his worst year to date - .306/.364/.474. He bounced back in 2003 - .323/.379/.573 with his sixth straight Gold Glove and All-Star spot. He finished 3rd in slugging behind Alex Ramirez and Kosuke Fukudome. That June, he tied R.J. Reynolds' Nippon Pro Baseball record of hits in 11 straight at-bats and set a new record by reaching in 14 straight plate appearances (the old record was 13 by Isao Harimoto in 1973); that mark didn't even survive the season unscathed, as Michihiro Ogasawara tied it in August. He helped Japan win Gold at the 2003 Asian Championship, leading all hitters in the event with a .583 average.

In 2004 the Giants right fielder hit .317/.387/.580. He hit 30 homers, helping Yomiuri set a new Japanese team homer record. His All-Star and Gold Glove streaks were each snapped at 6 as he failed to take home either honor for the first time. In the 2004 Olympics, Takahashi hit third for Japan, right in front of Kenji Johjima. He batted .289/.349/.553 with 9 runs and 8 RBI in 9 games. His 3 homers tied Kosuke Fukudome, Brett Roneberg and Yurendell de Caster for the Olympic lead.

2005 was an injury-plagued year for Takahashi as he missed about 50 games. Prior to the season, he had shoulder surgery and injuries have followed him throughout his career. Yoshinobu batted .298/.367/.502, still producing despite the injuries, albeit at a lesser rate than what he had done in the past couple years. After the season, he needed to have surgery once more, to remove bone spurs from his right ankle. Takahashi was expected to miss part of the '06 season. He recovered quicker than people thought, though, and was playing center field and batting 5th on opening day. His good health did not last long - on April 12 he injured the left side of his body when catching a fly ball. He wound up playing in 97 games, hitting .260/.320/.434 with 15 home runs. He moved to left field later in the year.

Takahashi batted .308/.404/.579 in 2007 with 35 home runs and 88 RBI as he was again healthy. He was 6th in the CL in average, tied Masahiko Morino for 7th in doubles (29), tied Tyrone Woods and Aaron Guiel for second in home runs (one behind Shuichi Murata), tied Murata for third in total bases (291), tied Michihiro Ogasawara for 9th in RBI, was second in times hit by pitch (16, trailing Guiel), was 6th in walks (66), third in OBP (behind Norichika Aoki and Woods) and led in slugging, 10 points ahead of runner-up Alex Ramirez. He won a Gold Glove and joined Aoki and Ramirez on the Best Nine team.

After 2007, Takahashi signed a 4-year deal with the Giants instead of opting for free agency. He was to earn 350 million yen in 2008 with performance incentives of up to 50 million yen.

Takahashi is known as a clotheshorse, according to Gary Garland.