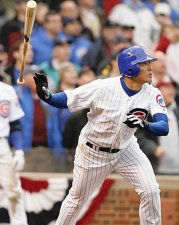 Seven teams bid for Kosuke Fukudome's services out of high school, but he opted instead to go to the industrial leagues. In 1996 he won a silver medal in the Olympics. In the 1997 Intercontinental Cup, he was on the Japanese squad that stunned Cuba, handing the Cubans their first Gold Medal game loss in 15 years. Fukudome hit only .190/.217/.286 in the event while splitting time between DH and third base. Due to his struggles, he sat out the historic finale.

In 2003 Fukudome hit .313/.401/.604 - he led the Central in OBP, runs (107) and triples (11) and was second to Alex Ramirez in slugging, second in the league in walks (78) and third in RBI (96) as he again made the Best Nine. He hit 34 homers and reached double digits in every extra-base hit category. Fukudome led the 2003 Asian Championship with 5 RBI, helping Japan win Gold. In '04, Fukudome was again doing well, though not as good as in 2003 (.277/.367/.569), but he lost time due to the 2004 Olympics and then injured his finger on September 1st when he was hit by Tsuyoshi Shimoyanagi pitch. He hit .316/.386/.605 with 3 homers, 11 runs and 10 RBI in 9 games in the Olympics, helping Japan to a bronze medal. He was second to Ariel Pestano in RBI and tied Yurendell de Caster, Yoshinobu Takahashi and Brett Roneberg for the most homers. Due to his injury, Fukudome missed the Japan Series, which the Dragons lost 4 games to 3 absent their star hitter. He still managed to lead the Central with 7 triples.

Fukudome bounced back in 2005, hitting .328/.430/.590 with 39 doubles, 28 homers, 93 walks, 102 runs and 103 RBI. He was second to Norichika Aoki in the batting race, second to Tomoaki Kanemoto in OPS, third in total bases, third in slugging, 10th in homers, tied for 4th in RBI, second to Kanemoto in walks, led the league in OBP for the second time (edging Kanemoto by one point), led in doubles for the second time, was second in triples (6) and third in RBI. He also struck out 128 times and won his third Gold Glove.

In 2007, Fukudome was disabled with a right elbow injury. At the time, he was hitting .294/.443/.520 and leading the CL in OBP despite not being in the top 10 in average. He went to the US to have endoscopic surgery to remove bone fragments from the elbow. He did not play again that year. Despite his absence, Chunichi went on to win the 2007 Japan Series, their first Japan Series title in 53 years.

In December, Fukudome signed with the Chicago Cubs for $48 million over 4 years, pending a physical. Chunichi picked up Kazuhiro Wada as a free agent to fill the corner outfield gap left by Fukudome's departure. Chicago Cubs manager Lou Piniella stated that Kosuke Fukudome would bat third in the line-up behind Ryan Theriot and before Derrek Lee.

Fukudome was the main CF for Japan in the 2009 World Baseball Classic, usually hitting 7th. He was just 4 for 20 at the plate with 7 strikeouts but also drew 7 walks and scored four runs. He tied Carlos Delgado, Hyun-soo Kim and Akinori Iwamura for 4th in the Classic in walks. Japan went on to win the Classic. In the 2009 regular season, he played 146 games and improved his batting line slightly over the previous year, to .259/.375/.421. He drew an excellent 93 walks (8th in the 2009 NL between Lance Berkman and Dan Uggla) and showed decent power with 38 doubles and 11 homers. However, he was only 6 for 16 in stolen base attempts while playing mostly centerfield. In 2010, he saw his playing time fall off a bit, getting into 130 games, with 358 at-bats. He posted his highest batting average in his MLB career at .263, and slugging percentage, at .439, and his .371 OBP was only 4 points off his previous year's total. His 13 homers were a career high, but his runs scored fell from 79 in his first two seasons to only 45. He had a 114 OPS+. That year, he played right field exclusively, fielding .995. Only Andre Ethier (.996) had a higher percentage among 2010 NL right fielders.

2011 marked the last year of his contract with the Cubs, and he started the year as the regular right fielder over the first half. His batting average was .273 in 87 games, but he had hit only 3 homers when on July 28th, the Cubs traded him to the Cleveland Indians in return for two minor leaguers, P Carlton Smith and OF Abner Abreu. The Indians looked to Fukudome to pick up some of the playing time available with starting outfielders Grady Sizemore and Shin-Soo Choo both on the disabled list. He played a further 59 games for the Indians, mostly in right field, but hit only .249 and with a very poor OBP of .300. The Indians were not interested in re-signing him after the season when he became a free agent. Overall, his OPS+ was an even 100 after four MLB campaigns. He had to wait until February 14, 2012 to find a team, returning to the Windy City to play for the Chicago White Sox. A far cry from his previous contract, he was only offered $500,000 for the season, although with an option for a much more lucrative second season were he to perform up to previous standards. However, he was designated for assignment and released on June 26th after hitting .171/.294/.195 with no home runs and 4 RBI in 24 games played and 41 at-bats. He then signed a minor league contract with the Yankees but was released on September 3 after hitting .276/.440/.378 with 37 walks in 39 games with the Scranton/Wilkes-Barre Yankees. Not finding any interest from major league clubs, he decided to return to Japan, signing a contract with the Hanshin Tigers in January 2013.

Fukudome then had his best season in years, batting .281/.361/.463 with 20 home runs and 76 RBI in 2015 while again playing error-free ball (226 PO, 5 A). He was back to hitting 3rd in the order and led the Tigers in dingers, 3 more than cleanup man Mauro Gomez. He was 8th in the CL in average (between Toritani and Matt Murton), 8th in OBP (between Gomez and Hayato Sakamoto), 5th in slugging (between Kazuhiro Hatakeyama and Shingo Kawabata), 4th in OPS (between Jose Lopez and Kawabata), 5th in home runs (between Yoshitomo Tsutsugo and Brad Eldred), 4th in RBI (between Tsutsugo and Lopez) and tied Sakamoto for 5th in walks (65). He made his first Best Nine in 9 years, joining Tsutsugo and Ryosuke Hirata in the outfield. He also became the oldest Gold Glove winner in NPB history, at age 38 years and 6 months. He joined Yoshihiro Maru and Yohei Oshima as the CL's Gold Glove outfielders.