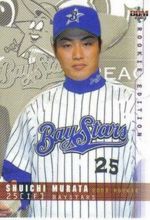 Shuichi Murata is a power-hitting third baseman for the Yokohama BayStars.

Murata hit .278/.350/.444 as Japan's DH in the 2002 World University Championship. He was picked in the first round of the 2003 draft by the Yokohama BayStars. He debuted with them the same year, as Yokohama's most-used second baseman (65 games, tied with Hitoshi Taneda) and a regular at third base (41 games). He hit .224/.303/.485 with 24 home runs, showing good pop; the rookie was second on the BayStars in homers, trailing veteran slugger Tyrone Woods.

Murata hit .266/.325/.519 in 2006 as he continued to emerge as an offensive force. He scored 83 runs, smacked 30 doubles, homered 34 times and drove in 114 while striking out in 153 of 545 AB. He was now Yokohama's regular cleanup threat. He tied Alex Ochoa, Seung-yeop Lee and Takuro Ishii for 4th in the CL in doubles, trailing Kosuke Fukudome, Adam Riggs and Andy Sheets. He was second in RBI, but 30 behind Woods, the leader. He ranked 4th in homers behind Woods, Lee and Riggs, hitting the most home runs of any Japanese native in Nippon Pro Baseball that year. He was 6th in total bases (283), tied Alex Ramirez for the most sacrifice flies (10), tied Kenji Yano for second in times hit by pitch (13, trailing Greg LaRocca), was 6th in slugging (behind Fukudome, Woods, Lee, Riggs and Akinori Iwamura) and led in strikeouts, two ahead of his former teammate Woods. Iwamura beat him out for Best Nine honors at third base in the CL.

In the 2006 MLB-NPB All-Star Series, Murata hit a solo homer off of John Lackey in game four.

Murata had another fine campaign in 2007, hitting .287/.371/.553 with 94 runs, 30 doubles, 36 homers and 101 RBI while he cut his strikeout total down to 117. He was third in the CL in runs (behind Norichika Aoki and Michihiro Ogasawara), 6th in doubles, led in home runs (beating out Aaron Guiel, Woods and Yoshinobu Takahashi by one in a close race), tied Shinnosuke Abe for 4th in RBI, tied Takahashi for third in total bases (291), was second to Abe in sacrifice flies (9), was third in times hit by pitch (15, trailing Guiel and Takahashi), fell to 5th in strikeouts, was up to 7th with 65 walks, was third in slugging (behind Takahashi and Ramirez) and was 5th in OBP. He again failed to make the Best Nine as Ogasawara beat him out at third base.

In the 2007 Asian Championship, Murata went 4 for 9 with a walk and an error, playing every game for Japan as they locked up a spot in the 2008 Olympics. In the Olympics themselves, Shuichi had as many errors (2) as hits (2), batting just .087/.160/.130 as Japan's starting third baseman with no RBI in eight games. His only big hit was a double off of Ki-joo Han to put two on with a 5-3 deficit and no outs in the bottom of the 9th against South Korea; Murata was stranded and Japan lost. They went home without a Medal.

Murata started the 2009 World Baseball Classic as Japan's third baseman. He hit .320/.379/.500 with 7 RBI in 7 games and 2 homers. He tied Norichika Aoki for the team lead in RBI and had half of Japan's home runs in the tournament. Shuichi tied Adrián González, Bum-ho Lee, Jin-young Lee and Aoki for 5th in the event in RBI. He hit a 2-run homer off Chenhao Li and 3-run shot off Kwang-hyun Kim during the Classic. He injured his hamstring partway through the last quarterfinal game and thus missed the last two contests as Japan took the title; Kenta Kurihara replaced him on the roster.