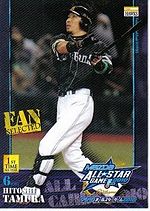 2004 marked a rare full season for Tamura. Hitting fifth behind Tyrone Woods and replacing Tatsuhiko Kinjo in center (Kinjo took his right field slot), Hitoshi hit .305/.363/.624 with 40 homers, 100 RBI and 126 strikeouts while playing excellent defense in center field. Emerging suddenly as a star player, Tamura set a Yokohama club record for home runs by a native Japanese player. He was fourth in the Central League in slugging, tied for fifth in homers, sixth in RBI and fifth in strikeouts.

Tamura began 2005 in even finer form. In April, he had two winning hits against Dan Miceli in the span of three days, helping ruin Dan's chances at a career in Japan. Tamura hurt his back in June but was still leading the CL in average and was a strong Triple Crown candidate before his season came to a crash in June. His porsche spun into an accident on the Yokohama-Yokosuka Expressway on June 29 and Tamura hurt his left shoulder and left retina. He returned after a month off but his production fell as he was not back to full form. He finished at .304/.369/.578 with 31 homers, fourth in the CL in slugging again, fifth in OPS, 7th in homers and missing the top 10 in RBI and average.

In 2006, Tamura sprained his wrist on June 3 to continue his run of injuries. Four days later, Hitoshi sustained a rib cartilage injury in a home-plate collision with Akihito Fujii. He was only healthy enough to play 39 games all year, batting .276/.359/.488. After the season, Yokohama dealt him to the Softbank Hawks for pitcher Hayato Terahara.