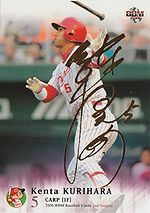 Kenta Kurihara is an infielder for the Hiroshima Carp. He has expressed interest in playing in Major League Baseball down the line.

With Arai leaving as a free agent following 2007, Kurihara became Hiroshima's cleanup hitter. He did not miss a beat, putting up a batting line of .332/.389/.515 with 31 doubles, 23 home runs and 103 RBI in 2008. He was third in the CL in average, trailing Seiichi Uchikawa and Aoki. He finished second in hits (185, 4 behind Uchikawa), 4th in doubles, 4th in RBI (103, behind Ramirez, Shuichi Murata and Ogasawara), 9th in homers, 7th in OBP and 10th in slugging and tied Yasushi Iihara for the most times hit by pitch (12). In a rare occurrence, he split Gold Glove honors with Arai at first. Despite his impressive season, he was not in the running for the Best Nine as Uchikawa won in a landslide at first base.

Following 2008, Kurihara had elbow surgery. He was named to Japan's preliminary roster for the 2009 World Baseball Classic, likely aided by Arai's absence due to back problems. He was then added to Japan's squad before the semifinals after Shuichi Murata was injured. Kurihara struck out twice in 3 at-bats in the Classic and ground into a double play the other time up, but Japan went on to win the title.