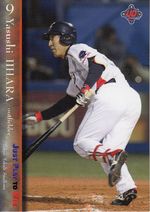 Iihara was a pitcher in high school but a shoulder injury caused him to become a position player. He was named to the Best Nine four times while in college. He was picked by the Yakult Swallows in the 5th round of the 2005 draft, the first player ever drafted by a NPB team from a college in Tochigi Prefecture.

Iihara spent most of the 2006 season at ni-gun, where he won MVP honors in the minor league All-Star game. He played 28 games for Yakult, hitting .324/.375/.324, backing up Ryuji Miyade, Alex Ramirez and Norichika Aoki in the outfield.

Iihara spent the winter of 2006 with the West Oahu CaneFires, hitting .274/.379/.534 while working on his defense at shortstop and third base. He was second on West Oahu in OPS behind John Mayberry Jr.. Iihara led the Hawaii Winter League with five homers and would have led in slugging had he played enough to qualify. He was named to the HWL All-Star team as the best shortstop, the only Japanese position player selected.

His 2006 performance inspired Yakult to give Iihara the starting third base job in 2007 after Akinori Iwamura left for the US. Iihara hit an unimposing .246/.289/.368 and stole 23 bases in 27 tries. His first career homer in NPB came on April 25 off Ryan Vogelsong. He tied for third in the Central League with 4 triples and tied Hirokazu Ibata for third in stolen bases, trailing Masahiro Araki and Norihiro Akahoshi.

Iihara was given even bigger shoes to fill in 2008, when Alex Ramirez left via free agency and Iihara was moved into the left field slot. He hit .291/.351/.434 with 28 stolen bases in 37 tries and a .356 average with runners in scoring position but his 9 homers were not what Ramirez used to contribute. He was among the league leaders in triples (7, tied for the lead with Kazuki Fukuchi), sacrifice flies (6, 2nd to Tomoaki Kanemoto), times hit by pitch (12, tied for the lead with Kenta Kurihara) and steals (6th).

On June 14, 2009, Iihara batted for Yuichi Matsumoto with Yakult having gotten hits in 10 straight at-bats to tie the NPB record. Yasushi promptly doubled off of Takashi Kamoshida to give his club the new mark.