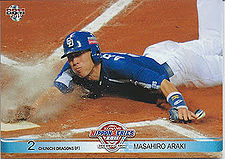 Masahiro Araki is the second baseman for the Chunichi Dragons. He is noted for his speed and defense.

In 1998, the 20-year-old played 7 games for Chunichi but had just one at-bat, appearing as a pinch-runner and defensive sub. The next year, he went 1 for 4 in 16 games in a similar role; in four steal attempts, he was only successful once. In 2000, Araki remained a substitute, playing 40 games but only getting 12 plate appearances (2 for 10, 2 sacrifice flies, 3 SB in 3 tries). He spent 34 games in the outfield.

Araki improved significantly in 2004, batting .292/.322/.349, stealing 39 bases in 48 tries and scored 93 runs. He replaced Hirokazu Ibata at the top of the Dragons batting order, Ibata dropping to second to form a swift 1-2 punch. He fielded .992 and won his first Gold Glove. He was second in the Central League in steals behind Norihiro Akahoshi and tied Toshihisa Nishi for third in hits (176). He made his first All-Star team. That year, Araki and Greg LaRocca tied for the CL Best Nine at second base; it was the first tie ever in voting for a Best Nine in NPB history. He hit .267/.333/.433 in the 2004 Japan Series as Chunichi fell in 7 games.

Araki joined the Japanese national team for the 2007 Asian Championship; appearing as a pinch-runner, he scored twice in three games and never batted, played the field or attempted to steal. In the second 2008 NPB All-Star Game, Araki won MVP honors, going 3 for 4 with 3 RBI in leading the CL to victory. In the 2008 Olympics, Araki hit .263/.364/.421 with 2 steals and 5 runs in 8 games, being used as Japan's main second baseman, playing flawless defense. Araki laid down 5 sacrifice bunts for traditionalist manager Senichi Hoshino's squad. In the Bronze Medal Game, Araki hit a first-inning solo homer off of Brett Anderson to put Japan ahead but the USA came back for a 8-4 win as Japan failed to get a Medal. Araki tied for the most steals in the preliminary rounds, as his 2 tied Giorvis Duvergel, Hyun-soo Kim, Tsuyoshi Nishioka, Eduardo Paret, Jong-wook Lee and Lingfeng Sun.