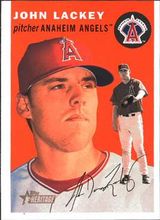 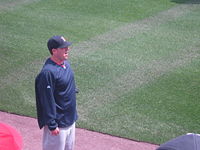 John Lackey pitched eight seasons in the major leagues for the Los Angeles Angels of Anaheim, winning at least 9 games each year. He had a winning record each season except for his second year. He then signed a big free agent contract with the Boston Red Sox.

Lackey signed a free agent contract with the Boston Red Sox in 2010. He went 14-11 in his first season in Boston, pitching 215 innings and striking out 156 batters. However, he struggled early in the 2011 season, putting up a 2-5 record with an 8.01 ERA in his first 7 starts, which included 3 starts in which he gave up 8 or more runs. He was placed on the disabled list on May 16 with a strained right elbow. The rough patch came after his wife was diagnosed with breast cancer in the off-season. He came back to pitch, but had to undergo Tommy John surgery after the season, having gone 12-12 with a 6.41 ERA in 28 starts. His 114 earned runs allowed and 19 hit batsmen were the most in the American League that season.

Lackey missed all of 2012, but was back in the starting rotation at the beginning of 2013. In his first start on April 6th, he had to leave a game against the Toronto Blue Jays in the 5th inning, victim of a strained right biceps in his forearm and was placed on the disabled list a couple of days later. However, when he came back on April 28th, it was the Lackey of old who showed up on the mound for a start against the Houston Astros; after giving up a run on a pair of walks and a single in the 1st, he completely shut down his opponents over the next five innings and left with a 5-1 lead, being eventually credited with his first win in two years as the Sox won the game, 6-1. He ended up going 10-13, 3.52 in 29 starts for the Red Sox, gradually claiming back his place as the team's number 2 starter behind Jon Lester with Clay Buchholz being injured most of the second half. He made four starts in the postseason, in addition to a rare but clutch relief appearance in Game 4 of the World Series. His record in his starts was 3-1, with the loss coming in Game 2 of the World Series, but it was redeemed with a strong performance and a win in Game 6 which gave the Sox the championship over the St. Louis Cardinals.

He was one of the few Red Sox players having a solid 2014 season, having gone 11-7, 3.60 in 21 starts, when he was traded to the St. Louis Cardinals on July 31st as the Red Sox cleaned house. Joined by minor leaguer Corey Littrell, he headed to St. Louis while 1B/OF Allen Craig and P Joe Kelly went to the last-place Sox. He was a winner in his debut for St. Louis on August 3rd, defeating the Milwaukee Brewers, 3-2. He went 3-3, 4.30 in 10 starts for St. Louis, to finish the year at 14-10, 3.82. He won his only start in the NLDS against the Los Angeles Dodgers and had a no-decision in the NLCS against the San Francisco Giants. In 2015, he had another good season, going 13-10, 2.77 in 33 starts for the Cardinals. It was the lowest ERA of his career and he struck out 175 batters in 218 innings. He started two games and won one as the Cards lost to the Chicago Cubs in the NLDS. On December 4th, he signed with the Chicago Cubs for two years and $32 million, having successfully proved he was among the elite starting pitchers in the majors.

When Lackey beat his former team, the Cardinals, 5-0, pitching for the Cubs on April 18, 2016, it made him the 16th pitcher in history to record wins against all 30 major league clubs. he went 11-8, 3.35 in 29 starts in his first season with the Cubs and helped the team to its first World Series title in 108 years. he started one game in each of the three postseason series the Cubs played that year, and while his record was 0-1, 4.85, he kept the team in all three games he pitched. In the World Series, he started Game 4 at home against the Cleveland Indians on October 29th and gave up 2 earned runs in 5 innings, but was charged with the 7-2 loss that put the Cubs on the verge of elimination (they were trailing, 3 games to 1, at that point), but Chicago rallied to win the final three games. It was the third Series ring for John, after those won with the Angels as a rookie in 2002 and with the Red Sox in 2013. He returned to pitch another season in 2017, although, like the rest of the team, he found the going tougher than in the magical curse-breaking season. Still, on September 27th, he pitched what was likely the final start of his career and led the team to a 5-1 win over the Cardinals that clinched a second straight division title for Chicago. That gave him a record of 12-11, 4.36 in 30 starts on the year. He was expected to be used out of the bullpen in the postseason.

Lackey is the most successful of the five major leaguers to come out of the University of Texas at Arlington.