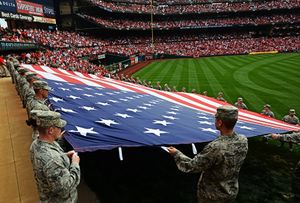 The 2013 St. Louis Cardinals went into the All-Star break with the best record in the major leagues at 57-36, although they were only one game ahead of the Pittsburgh Pirates, who had surprisingly kept up with their torrid pace from the start of the season and had in fact passed them on a couple of occasions. They finished the first half in typical fashion, defeating the Chicago Cubs, 10-6, on the strength of a 23-hit attack and a four-run 9th inning on July 14th. They had achieved this success in spite of the absence of three key pitchers, starters Chris Carpenter and Jaime Garcia and closer Jason Motte. To compensate, Adam Wainwright had re-established himself as one of the top starters in the major leagues, Edward Mujica had stepped in ably into Motte's shoes, and a number of young pitchers promoted from the minor leagues had given the team strong performances when called upon. However it was the consistent hitting of All-Stars 1B Allen Craig, 2B Matt Carpenter, CF Carlos Beltran and C Yadier Molina which had carried the team day after day, always giving the pitchers runs which with to work.

The Cardinals hit a cold spell right after the All-Star Game, however. From July 26-30, they lost 6 consecutive games, capped by being swept by the Pirates in a doubleheader on the last day. That streak dropped them out of first place, which was taken over by the Bucs. They lost again to the Pirates on July 31st to end the month on a 7-game losing streak. They were trailing the Bucs by 2 1/2 games at that point, but were still leading the wild card race.