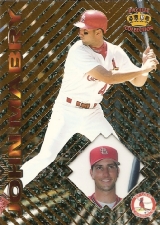 John Mabry's career numbers rank him as the top player chosen in the 6th round of the 1991 amateur draft, in every major statistical comparison.

After his selection by the St. Louis Cardinals, Mabry made his way through the team's farm system and debuted with the parent club in 1994 for 6 games. His next two seasons were the best of his career. In 1995 he hit .307 in 129 games and finished 4th in the 1995 National League Rookie of the Year Award balloting. Mabry followed up strong in 1996, hitting .297 with career highs in hits (161), doubles (30), home runs (13), and RBIs (74). The season included him hitting for the cycle on May 18th against the Colorado Rockies. Mabry fell off after that season but continued to find roster spots throughout the majors, covering first base and corner outfield spots on part-time duty wherever he landed. In total Mabry played 14 years with 8 teams, ending his career with the Colorado Rockies in 2007.