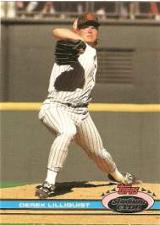 On June 2, 1987 the Atlanta Braves drafted Derek Lilliquist in the first round (6th pick) of the amateur draft. He signed to play on August 4th. He was sent to the class A Durham Bulls, where he won 2 and lost 1 in 25 innings for a 2.88 ERA. He also spent time with the GCL Braves, with no decisions.

Derek was with the Padres for six games in 1991, going 0-2 and wound up the rest of the year with the Pacific Coast League Las Vegas Stars, going 4-6 with a 5.38 ERA. In late November he was selected off waivers by the Cleveland Indians from the Padres.

Lilliquist would spend three seasons, 1992 through 1994, with the Indians, winning 10 and losing 10 during this run. The Boston Red Sox picked him up when the Indians granted Derek free agency in late 1994.

In 1995 Derek was 2-1 in 26 games in relief with the Red Sox also having a 6.26 ERA. He was released in July and signed as a free agent with the Los Angeles Dodgers but was cut loose at the end of the season with no record. The Cincinnati Reds signed Derek for 1996 but he failed to win or lose in five games and was cut loose by the Reds at the season's end. This was his last trip to the majors.