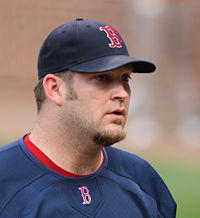 Brad Penny, a two-time All-Star, was a key part of the World Champion Florida Marlins, for whom he won 2 games in the 2003 World Series.

Penny went to Broken Arrow High School. In 2005, he and Jim Brewer, also an alumnus, had their uniforms retired in a joint ceremony.

In 1997, he was with Single A South Bend in the Midwest League, going 10-3 with a 2.73 ERA. Moved up to Single A High Desert in the California League in 1998, he was 14-5 with a 2.96 ERA. He won a plethora of awards for that performance, including Baseball America First Team Minor League All-Star Starting Pitcher, Arizona Diamondbacks Minor League Player of the Year, and A Level Player of the Year.

Next year, 1999, he started at Double A El Paso of the Texas League, where he went 2-7 with a 4.80 ERA. The Diamondbacks, in spite of his previous year, were willing to trade him to the Marlins in a deal for Matt Mantei, who was already a major leaguer and could help them immediately. 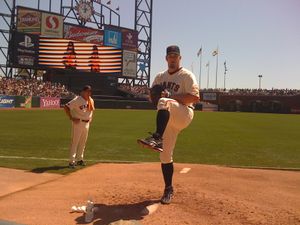 Penny on the mound

He finished up 1999 at the the Florida Marlins affiliate in AA Portland in the Eastern League, going 1-0 with a 3.90 ERA in 6 games. In the 1999 Pan American Games, Penny was 0-1 with a 6.75 ERA. He lost the Gold Medal game against a tired Jose Contreras, failing to make it through the fifth inning.

2000 found him pitching only 5 games in the minors at two locations, with an ERA under 2.00 in both places. Most of the year, he was up with the Marlins as a starting pitcher.

Penny did well in 2004, with a 3.15 ERA. He was traded near the end of July to the Los Angeles Dodgers. He suffered a bicep injury in August and re-hurt it in September.

In 2005, after starting the season on the disabled list with the previous year's injury, the Penny went 7-9 with a 3.90 ERA. MLB.com says he became "the only pitcher in the Major Leagues who pitched more than 175.0 innings this season who posted so low an ERA on his way to so few victories".

Penny became somewhat famous for an incident in 2005 with a batboy. Penny bet the batboy that he could not down a gallon of milk in an hour. The batboy succeeded in doing so, but threw it up. When the team found out, they suspended the batboy. Penny was quoted as saying "It's kind of ridiculous that you get a 10-game suspension for steroids and a six-game suspension for milk."

Penny went 11-11 with a 5.30 ERA pitching for the Detroit Tigers in 2011; Detroit had signed him hoping that he could be a number 2 starter behind Justin Verlander, but his high ERA meant that instead, his role diminished as the season went along, and he was easily passed by Rick Porcello, Max Scherzer and Doug Fister, becoming an afterthought by the time the team was in full pennant-chase mode. He had made 31 starts and pitched 181 2/3 innings during the season, but in the postseason was only used once, that coming in Game 6 of the ALCS, with the Tigers already virtually eliminated. He did not help his cause anyway when he gave up 5 runs on 7 hits to the Texas Rangers in 1 2/3 innings, as Detroit went down, 15-5. Not finding significant interest from major league teams after the season, he signed with the SoftBank Hawks for 2012. He had a rough debut in Nippon Pro Baseball on April 4th against the Rakuten Golden Eagles, allowing 7 hits, 3 walks and 6 runs (4 earned) in 3 1/3 IP to take the loss. He was then stopped from pitching again by a shoulder injury, and requested his release from the team, which was granted on May 8th. Apparently, the request was made because some unspecified major league teams had expressed interest in signing Penny (which had not been the case the previous off-season) and he wanted to explore a return to the U.S.; there was also talk that he had found the cultural adaptation to Japan much more difficult than anticipated. He did sign with the San Francisco Giants on May 18th and pitched 22 times in relief for the eventual World Series champions. The results were far from great: a 0-1 record, a 6.11 ERA and 42 hits allowed in 28 innings, with only 10 strikeouts. Not surprisingly, he was not used in the postseason.

Penny was inactive in 2013, then made an attempt at a comeback in 2014, signing a minor league contract with the Kansas City Royals on January 16th. However, he did not show anything in spring training and was released on March 7th after giving up 4 runs on 8 hits in 2 innings. He then apparently punched an immovable object in frustration, breaking his left hand. However, he signed a minor league contract with his original team, now the Miami Marlins, in mid-June and made it back to the majors with them on August 9th, when he defeated the Cincinnati Reds, 4-3. He went 2-1, 6.58 in 8 games. he then spent 2015 with the Charlotte Knights, the AAA affiliate of the Chicago White Sox, and went 7-10, 4.46 in 24 starts. In 2016, he went to spring training with the Toronto Blue Jays, but after a few unsuccessful outings, he announced his retirement in mid-March.

He became eligible for the Hall of Fame in its 2020 election but received only a single vote and was dropped from the ballot.

He dated actress Alyssa Milano for a time. He likes to fish and hunt, and owns race horses.