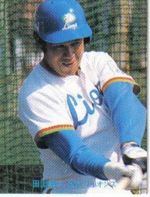 Koichi Tabuchi was a catcher, first baseman, coach and manager in Japan. He made the Best Nine team five years in a row and was a 11-time All-Star. The slugger set a college home run record and later won a home run title in the Central League and went deep 474 times in Nippon Pro Baseball. He was the center of one of the more notable trades in Japan in the 1970s. Unlike some sluggers, Tabuchi did not hit many doubles, usually hitting high and long homers when he connected. [1] After finishing up as a player, Tabuchi worked as a baseball commentator and then as a manager. He most recently has been a hitting coach, including a stint with the Japanese national team that included the 2008 Olympics.

Tabuchi slugged 22 homers while at Hosei University. This was the Tokyo Big Six University League record for 30 years, before Yoshinobu Takahashi broke it. [2] In 1968, he was picked by the Hanshin Tigers in the first round of the draft. He debuted in NPB in 1969 and hit .226/.320/.457 with 22 HR, making the Central League All-Star team as a rookie. [3] He won the CL Rookie of the Year award that season. [4]

Tabuchi batted .244/.327/.478 in 1970 and homered 21 times in 316 AB but missed three months after being plunked in the head by Yoshiro Sotokoba on July 26. A player who took lots of pitches, he struck out 74 times that year after 98 times as a rookie. [5] He played only 80 games in 1971 but still made his third consecutive All-Star team. He homered 18 times in 276 AB. In the All-Star game, Tabuchi was involved in a historic moment when he was behind the plate as Central League starter Yutaka Enatsu struck out the first nine Pacific League All-Stars in order to open the game. [6]

In 1972, Tabuchi produced at a .258/.341/.516 clip with 34 home runs. In addition to being named to the CL All-Star team, Tabuchi was honored as the top catcher in the CL by making the Best Nine for the first time. [7] The next season, Koichi had several impressive accomplishments. At one point, he homered in four consecutive games (May 12-15). In seven consecutive at-bats against the Yomiuri Giants, he homered every time, a NPB record for consecutive homers against one club. On September 9, he was intentionally walked by Takeshi Yasuda, ending Yasuda's record of 81 consecutive innings without hitting or walking a batter. Tabuchi made the Best Nine again, was an All-Star again and won his first Diamond Glove Award. The slugger batted .256/.393/.550 with 37 HR (only 6 doubles), 90 RBI and 85 walks (24 intentional). [8]

Tabuchi was traded to the Seibu Lions with Kenji Furusawa for Akinobu Mayumi, Masashi Takenouchi, Masafumi Takeda, Yoshiharu Wakana and 20 million yen. Seibu GM/manager Rikuo Nemoto wanted a "flagship player" as the team had just changed ownership and wanted to show its commitment to change. As Tabuchi's weight issues were hampering his defensive abilities and his personal life was the subject of much tabloid review, Hanshin had shipped him around, with four teams showing interest. Additionally, new Tigers manager Don Blasingame was stressing a small-ball game which did not fit with Koichi's skills. Typical of the whole affair was how Hanshin notified their long-time star - they called him at two o'clock in the morning.

Tabuchi played his final 86 games in 1984, making his 11th and last All-Star team. He hit .230/.303/.409 and hit 14 homers in 291 AB, ensuring that he had reached double-digit home run totals in all 16 of his seasons. [28] The 38-year-old showed his dedication to the Japanese style that year when he fielded 900 straight grounders in spring training over the course of 2 hours and 50 minutes before collapsing, unable to stand anymore. Robert Whiting said it was the gattsu (guts) drills record for the 1980s.

His hobbies are tennis and golf. [37] He was elected to the Japanese Baseball Hall of Fame by the Experts Division (veterans committee) in 2020; he was the only player voted in that year as the Sportswriter picked no one.

Views on Foreign Players in Japan[edit]

When Randy Bass of Hanshin challenged Oh's single-season home run record in 1985, Tabuchi rooted for his contemporary over the player on his old team. He stated later that "[P]eople didn't want anyone other than a Japanese to break this record." [38] On the other hand, when Tuffy Rhodes challenged Oh's mark in 2001, Tabuchi's views had evolved. He said "Back then (Bass's time) the game seemed like Japanese versus the U.S...people are watching a lot of American ball and have gained a real appreciation for it. There's no prejudice anymore." [39] Boomer Wells recalls Tabuchi of being supportive of him when he struggled in 1992, recalling his own comeback after he felt washed-up, whereas Nemoto urged him to retire. [40]