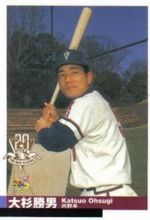 Katsuo Osugi was a five-time Best Nine pick who was named to the Japanese Baseball Hall of Fame in 1997. He was the first player in Nippon Pro Baseball to have 1,000 hits in both the Central League and Pacific League.

Osugi quit baseball for a period during high school after internal bleeding in his brain after being hit by a pitch, followed closely by the death of his father and brother. He returned to play in the industrial leagues for Marui Department Stores. When that club folded, his manager worked out a try-out for Osugi with the Toei Flyers. They signed him after the workout.

In 1967, he became a starter and batted .291/.359/.511 with 27 homers. He led the Pacific League in strikeouts (107) and plate appearances (552). He was sixth in the PL in batting average. Osugi also made the first of 8 All-Star teams and hit a grand slam in the third All-Star game that year, taking Yutaka Enatsu deep. He made the Best Nine in the PL at first base.

Osugi slumped in 1968 with a .239/.318/.494 with 34 home runs and 89 RBI. He was four home runs behind leader Katsuya Nomura, though his 106 whiffs paced the circuit. Late in the year, he began a consecutive games played streak that would last seven years. In 1969, the 24-year-old hit .285/.349/.556 with 36 HR and 99 RBI. He made his second All-Star team. He hit a PL-record three sayonara home runs in a year and homered in five straight games. Osugi was just two RBI behind league leader Atsushi Nagaike and was five home runs behind Osugi. He made his second Best Nine.

Osugi produced at a .339/.388/.671 clip, making huge strides in 1970. He finished second to Isao Harimoto in average to deny him a Triple Crown as he led in home runs (44) and RBI (129), both career highs. He also set a NPB record for sacrifice flies (15) and led the league in total bases (330), slugging percentage and double plays ground into (18). He also decked Carl Boles following a collision in a game on April 28; he was not ejected because the second-base umpire said he did not see the punch. He made his third All-Star team and Best Nine.

Not quite as productive at age 26, Osugi remained a force, hitting .315/.397/.605 with 41 home runs and 104 RBI. Surprisingly, he missed the All-Star team that year. On May 3, he was part of a record home run barrage when five straight Flyers homered - Susumu Sakudo, Tsuyoshi Oshita, Yutaka Ohashi, Isao Harimoto and finally Osugi. He led the PL in plate appearances (562), hits (154), home runs, total bases (296) and intentional walks (18). He was sixth in average and again was a Best Nine selection.

Osugi again cracked 40 homers in 1972. He batted .295/.376/.579 and led the loop in RBI (101, tied with Nomura). He also led in double plays ground into (21). He was one home run behind Nagaike, who led the league. He made his fifth and final Best Nine, his fourth All-Star team and won his only Diamond Glove Award. He was 9th in the PL in batting average. On May 6 of that year, he charged the mound with his bat after being hit by a pitch from Hiroaki Shibaike.

From 1984-1988, Osugi worked as a baseball commentator for Fuji Television. He was the hitting coach for the Taiyo Whales in 1990 and 1991. He died a year later of liver cancer. Five years after his death, he was voted into the Japanese Baseball Hall of Fame.

This biographical article is missing the person's: death place
Retrieved from "https://www.baseball-reference.com/bpv/index.php?title=Katsuo_Osugi&oldid=613651"
Categories: