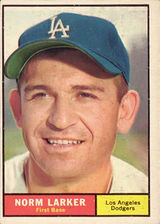 Norm Larker played six seasons in the major leagues, most notably in 1960 when he was second in the National League in batting average with a .323 average, and in 1962 when he was one of the batting leaders for the original Houston Colt .45's.

Larker was playing minor league ball even before 1950. He was with the Hazleton Mountaineers of the North Atlantic League, from which he was purchased by the Brooklyn Dodgers. In 1950 he played for the Greenwood Dodgers. He played for the Montreal Royals in 1954. He also played for the Mobile Bears.

He broke in with the Dodgers in 1958, the first year that they played in Los Angeles. He was a 27-year-old rookie, appearing in 99 games and hitting .277 with a .427 slugging percentage (the team slugging percentage was .402). He was mostly an outfielder that year, but for the rest of his major league career, he was mostly a first baseman. Possessing limited power, Larker's lifetime batting average was a very solid .275.

1960 was his big year with the bat, and he named to both the first and second All-Star Games played that year. He became the regular first baseman for the Dodgers as Gil Hodges became a back-up. Hodges played more games at first in 1961, though, as Larker appeared in 97 games with a .270 batting average.

Larker was then picked in the expansion draft by the Colt .45's. He led the team in doubles and on-base percentage in 1962, and tied for the team lead in walks. He hit .263 on a team that hit .246. After the season he was traded to the Milwaukee Braves, and in 64 games in 1963 hit only .177. Traded to the San Francisco Giants in August, he got only one hit in 14 at-bats. His major league playing days were over.

He later played in Japan for the Toei Flyers in 1965 and 1966. In his second year with the team, the other American on the team was Don Zimmer, who had been a teammate of Larker's with the Dodgers. His son Wayne Larker has been a long-time college coach. Wayne was born in Cuba, where father Norm was playing winter ball.