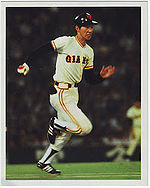 Shinozuka kept it up in 1985, batting .307/.367/.408 and made the All-Star team. He was 9th in the circuit in average. Akinobu Okada was named as the Best Nine second baseman in the CL that season.

After retiring as a player, Shinozuka coached for Yomiuri. He was a coach for the Japanese national team when they won the 2009 World Baseball Classic.