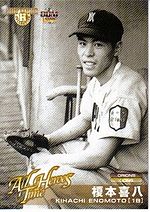 Kihachi Enomoto made 12 All-Star teams and nine Best Nines in the Pacific League while taking home two batting titles in a stellar career.

Enomoto made his pro debut with a bang with the 1955 Mainichi Orions. Fresh from high school, he hit .298/.410/.473 with 87 walks (most in the league), 84 runs and 16 homers. He set a record of 97 BB+HBP for a Nippon Pro Baseball record and he claimed the Pacific League Rookie of the Year award. He also made his first All-Star team. He was 10th in the league in average.

Kihachi batted .282/.393/.454 in 1956 with 95 walks to 41 strikeouts. He smashed 15 home runs and legged out eight triples. The youngster again paced the PL in free passes and was an All-Star. He made his first Best Nine as the top first baseman in the Pacific League.

At age 31 in 1968, Kihachi's batting line read .306/.384/.499 with 31 doubles, 21 home runs and 70 runs. He was two doubles behind league leader George Altman and was 4th in the PL in average behind Harimoto, Altman and Masahiro Doi. He was named the top first baseman in the Pacific League for the 9th time, a record. He also made his 12th and last All-Star team. He handled 1,516 chances without an error from 1967-1968, setting a league record. The record stood for over 50 years before José López broke it. Two other records he set in 1968 were 1,126 consecutive error-free chances in a season and a .999 fielding percentage at first base.

Through 2009, Kihachi ranks among the career NPB leaders in doubles (7th, between Nagashima and Tetsuharu Kawakami), hits (14th, between Koji Yamamoto and Tomoaki Kanemoto), average (27th), runs (19th), total bases (18th), walks (11th, between Kazuyoshi Tatsunami and Yamauchi), times hit by pitch (18th, 90), sacrifice flies (67, tied for 18th), games (20th), at-bats (18th) and plate appearances (18th). His offensive rankings were not helped by the fact that he spent most of his career in a pitcher-friendly era.

Enomoto qualified for membership in the meikyukai but does not involve himself in their activities and is not deemed a member, which is very rare. Hiromitsu Ochiai is one other player who turned down membership.

After baseball, Enomoto worked for a parking garage management company and wrote about baseball. He died of colon cancer at age 75. He was inducted into the Japanese Baseball Hall of Fame in 2016.

This biographical article is missing the person's: death place
Retrieved from "https://www.baseball-reference.com/bpv/index.php?title=Kihachi_Enomoto&oldid=1117453"
Categories: