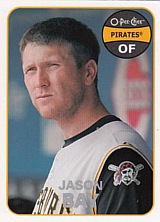 Jason Bay was a three-time All-Star, best known for his time with the Pittsburgh Pirates. He excelled in a two year stay once Pittsburgh peddled him off to Boston but his career fell apart upon joining the New York Mets as a free agent. A three-time Tip O'Neill Award winner, he was inducted into the Canadian Baseball Hall of Fame in 2019.

Bay played in the 1990 Little League World Series. In 1996, he played on the Canada Junior Olympic team. Enrolling in North Idaho College, he was All-Scenic West Athletic Conference in 1997 and, the next year, he won the same honor while setting school records for homers (21) and average (.447). In 1999, Jason moved to Gonzaga, where he batted .360 with 20 home runs and 74 RBI, a school record. He appears to have been second in the West Coast Conference in homers and RBI and made the All-Conference team in the outfield. As a senior, he kept on hitting, batting .388 with 15 homers. He led the WCC in average and made the All-Conference team for the fourth straight season.

Bay was with three organizations in 2002. On March 24, Montréal traded him to the New York Mets, with Jimmy Serrano, for Lou Collier, one of several ill-advised deals in which he was given away. This was at a time when Expos' GM Omar Minaya, appointed by MLB, had been told the team would be contracted at the end of the season, and consequently decided to trade away a number of prospects who were a few years away from the majors in return for immediate help. Bay hit .272/.363/.437 with the St. Lucie Mets and was 22-for-24 in steals. Moving up to the Double A Binghamton Mets of the Eastern League, he produced at a .290/.383/.477 clip and stole 13 bases in 16 tries. On July 31, New York dealt him, with Josh Reynolds and Bobby Jones, to the San Diego Padres for pitchers Steve Reed and Jason Middlebrook. He batted .309/.411/.568 with the Mobile BayBears of the Southern League. Overall, he had 17 homers and 85 RBI in his three stops.

In 2003, Jason put up a .303/.410/.541 line with the Portland Beavers of the Triple A Pacific Coast League, swiping 23 bases in 27 tries and homering 20 times. He was 17 points shy of the league lead in OBP (.427 by Brian Dallimore) and 13 slugging points behind leader J.J. Davis. He made his Major League debut in a brief stay with the Padres in May. Bay was traded to the Pittsburgh Pirates on August 26, with Oliver Perez and a player to be named later, in return for Brian Giles; the move was highly criticized at the time by Pirates fans, who felt it was a salary dump and giveaway. Bay was put into Pittsburgh's starting lineup almost immediately and hit .291/.423/.506 for them. While Davis had outslugged him in the PCL, he rode the pine for the Pirates while Bay became an everyday player.

Jason's rookie year with the 2004 Pirates was a dazzling show as he produced at a .282/.358/.550 clip with 26 homers. Surprisingly, he was only 4 for 10 in stolen bases. He holds the distinction of being the first Pittsburgh Pirate to ever win the Rookie of the Year Award, an impressive achievement in light of the men who have worn the Bucs uniform over the years (Clemente, Stargell, Barry Bonds...). Ralph Kiner would have been a serious candidate in 1946, the year before the BBWAA began issuing the award, while Jason Kendall, Johnny Ray, Mike Dunne and Don Robinson had been named NL Rookie Player or Pitcher of the Year by The Sporting News. Bay broke the Pirates' rookie records for home runs (previously held by Johnny Rizzo in 1938 and Ralph Kiner in 1946 - they both had 23). He collected 8 RBI in one game that year.

Bay had minor surgery on his left knee in the 2006-2007 offseason and started spring training late, playing DH initially as his knee recovered. Jason hit his 100th home run as a Pirate on April 30, with a game-winner off Michael Wuertz, becoming the 20th Pirate to reach that mark. Bay was effective in April and May, slugging .495 with a 119 OPS+ the first month and hitting .336/.403/.536 with a 140 OPS+ the next and appeared on pace for his typical season. He collapsed in June and July, though, with a 568 OPS and 679 OPS respectively. That clearly marked the worst two-month stretch of his career to date; his previous low OPS for a month was 761, and he did not hit even one double in July. He started August with a 3-for-5 day after doing well at the end of July and appeared to have broken out of his major slump. Bay only batted .247/.327/.418 for the 2007 Pirates with 21 home runs. He had a 93 OPS+, the worst of his career to that point. He only finished among the 2007 NL leaders in strikeouts, tied for 5th with 141.

Stardom with the Boston Red Sox[edit] 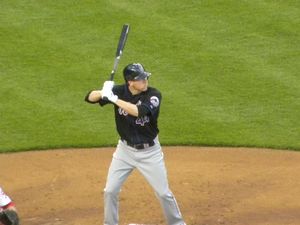 Playing for the Mets.

Bay was openly critical of the Pirates administration's lack of action to try to improve the team in the 2007-2008 offseason. He hit .282/.375/.519 for the 2008 Pirates with 22 homers in 106 games, crediting the resurgence in part to new coach Don Long. He was 8th in the 2008 NL with 72 runs scored. He was then traded to the Boston Red Sox as part of a three-way deal; Pittsburgh got Andy LaRoche, Craig Hansen, Bryan Morris and Brandon Moss while the Los Angeles Dodgers got Manny Ramirez and $7 million. Bay did well for the Red Sox, hitting .293/.370/.527 with 9 homers in 49 games through the rest of the year. He added 3 home runs in the two postseason series the Red Sox played that year.

Bay played for Canada in the 2009 World Baseball Classic, starting in center field because the team lacked a true center fielder; he was more athletic than the aging Matt Stairs and minor leaguer Nick Weglarz, who filled the other two outfield spots, providing the Canadian team poor outfield defense. The Canadians gave Team USA a scare in the opening game, losing by a single run, but were surprised by the Italian national team in their second game, bowing out of the tournament in ignominy. In 2009, Bay had probably his best overall season as the Red Sox's starting left fielder. Playing 151 games, he hit .267/.384/.537, and used the Green Monster to its full potential, slamming 29 doubles and 36 homers, scoring 103 runs and driving in 119. He was named to the American League All-Star team and showed good instincts in playing the left field corner in Fenway Park, collecting 15 outfield assists by playing balls caroming off the wall very well. He only went 1 for 8 in the postseason, however, as the Red Sox were swept by the Los Angeles Angels in the ALDS.

A Fiasco in New York[edit]

Jason seemed to have found the perfect situation in Boston, with his talents ideally suited to playing left field at Fenway Park. He was a free agent after the 2009 season, and coming off back-to-back excellent years, he commanded top dollar on the open market. The New York Mets made him the sort of offer no one can refuse in the form of a four-year deal worth $66 million. The Red Sox were unwilling to offer a contract that long or for that much, and Bay moved over to New York. But he was moving into a ballpark - Citi Field - that worked against his talent: the distant fences sapped his power, and the vast outfield expanses made his shortcomings with the glove more apparent. If that was not enough, injuries also began to bug him, and the result was a terrible three-year run that was a nightmare from start to finish.

In 2010, he played only 95 games, hitting .259 with only 6 homers and 47 RBI. As projected, Citi Field depressed his home run power, but he did hit 20 doubles and 6 triples and draw 44 walks, giving him an OPS+ of 105. He missed the last two months of the season after suffering a concussion when he slammed into the left field wall at Dodger Stadium. More injuries followed in 2011: he missed the first three weeks of the year with a strained ribcage, then was limited to 123 games, seeing his average slip to .245. Even though he hit 12 homers, his OBP and slugging percentage both fell from the previous year, from .347 to .329 in the case of his OBP, and from .402 to .374 in the case of the slugging percentage. His OPS+ was only 97, highly disappointing for one of the team's highest-paid players. In 2012, he hit rock bottom. Once again, injuries cut into his playing time. He was on the disabled list from April to June with a broken rib, then missed a month with another concussion, the result of running into the fence in his own ballpark this time. When he did play, he was awful, hitting a mere .165 with 8 homers but only 2 doubles and 20 RBI in 70 games. After the season, the Mets decided to cut their losses and negotiated a buyout of the final season on his contract, worth $21 million, by spreading the payment over a number of years, making him a free agent. On December 5, 2012, Bay signed a one-year deal with the Seattle Mariners, hoping to resurrect his career while playing close to where he grew up. He only hit .204 in 68 games, with 11 homers and 20 RBI. The Mariners gave him his release on August 6 and he did not play after that. The following offseason, he told journalists that he planned to retire definitely at age 35.

He became eligible for the Hall of Fame in 2019 but did not receive a single vote in his lone appearance on the ballot. He was elected to the Canadian Baseball Hall of Fame that same year.

His sister Lauren was a pitcher on Canada's 2004 Olympic softball team. She went 3-2 for the fifth-place Canadian team.