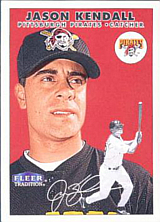 Jason Kendall played fifteen seasons in the major leagues as a catcher. He was an unusual catcher in that he had a lifetime batting average of .288 and stole bases well, with 189 in his career. While he didn't have much power, he drew walks well and rarely struck out. He spent his first 9 seasons with the Pittsburgh Pirates and had his best years there.

He was also almost always among the league leaders in hit-by-pitch, and ranked in the top five all-time in that category, with 254. A three-time All-Star, he finished in the top ten in batting three times.

In 2006, when he played for the Oakland Athletics, it was his first year on a division-winning team. That year, Kendall became the first catcher to catch 140 games in a season 8 times. He returned to the playoffs in 2007, when he finished the season with the Chicago Cubs, but he missed the 140-game mark by 8, after having lost playing time in the early part of the season when his batting average dipped to .226 with the Athletics. He signed with the Milwaukee Brewers after the season. In 2009, Kendall became the 8th player in MLB history to collect 2,000 hits while playing mostly catcher. He followed Ivan Rodriguez, Ted Simmons, Carlton Fisk, Yogi Berra, Mike Piazza, Gary Carter and Johnny Bench.

The son of Fred Kendall, catcher, Kendall suffered a gruesome broken ankle in 1999 while running to first base.

Kendall and former Kansas City Royals teammate Willie Bloomquist are good friends and together vied to represent the United States in the 2018 Olympics in two-man bobsled. He also loves to surf, and does so most days during the offseason.

"It feels exactly the way I thought it would feel, only better. A lot better." - Jason Kendall, who had never been in post-season play, on his feelings about the A's clinching the division title