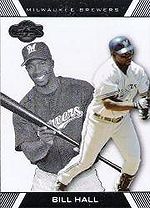 Bill Hall played for the Long Island Ducks of the Atlantic League after being a regular for a number of seasons with the Milwaukee Brewers and then bouncing around the majors from 2009-2012. During his career, his aggressive approach at the plate led to impressive power numbers, but also high strikeout totals, and eventually such low batting averages that he lost his starting position. However his versatility in the field allowed him to remain in the major leagues for several more seasons despite his struggles at the plate.

In 2001, Hall began to show more power at the plate. He totaled 18 home runs between single-A and double-A and stole 23 bases. He also hit .291 in the 2001 Arizona Fall League. Hall spent the majority of the 2002 season in triple-A, and struggled to make adjustments, batting just .228 with 4 homers in 465 at bats. The Brewers gave Hall a brief audition at the major league level, where his average was .194 over 19 games. He recorded his first major league home run on September 2nd at Wrigley Field; it was his first major league hit.

Milwaukee's shortstop, J.J. Hardy, suffered an ankle injury that cost him much of the 2006 season. Hall served as Hardy's replacement, and was one of the team's best hitters. His average was .270 with a career best 35 home runs. He also tacked on 39 doubles. On Mothers' Day, Hall hit a game-winning home run with a promotional pink bat. He also struck out 162 times. He hit the first home run at the new Busch Stadium, and the bat was put on display in Cooperstown. On June 12, 2007, he was part of the losing Brewers in Justin Verlander's no-hitter but was not retired once, drawing three walks in three times up.

Hall made his first and only major league pitching appearance on May 28, 2010, pitching a scoreless 9th inning for the Boston Red Sox against the Kansas City Royals in a 12-5 blowout.