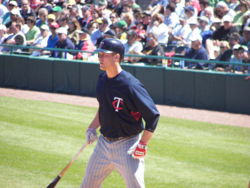 Justin Morneau is a first baseman who was the surprise winner of the 2006 American League MVP award. The favorites had been Derek Jeter and David Ortiz, who finished second and third in the voting. Morneau was only the second Canadian-born player to receive the MVP award (Larry Walker was the first).

In the 2001 Baseball World Cup, Morneau played first base and catcher but went 0 for 8 with a walk as one of numerous Canadians who would later play in MLB who struggled at the plate in that tournament. 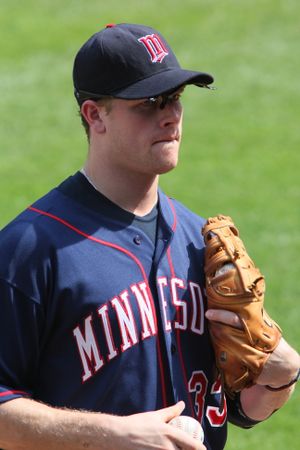 Morneau spent six years in the minors, often dominating the leagues he played in. In 2000, he spent most of the season in the rookie league, hitting .402 and slugging .665. In the first half of 2001, he was in Single A ball in the Midwest League, hitting .356 with a .597 slugging percentage. He had pieces of three seasons in the AA Eastern League, and when he started hot in 2003, he moved up to AAA ball and also the majors. The next year, he spent half the season back in Triple A, slugging .615, and moved into the big leagues for good.

Morneau became the highest-paid player in Minnesota Twins history when he signed a 6-year, $80 million deal in January of 2008.

He became the first Canadian to win the Home Run Derby on July 14, 2008, defeating Josh Hamilton of the Texas Rangers. After having a great year in 2008, in which he hit .300 with 23 homers and 129 RBI and finished second in the voting for the MVP Award, he played for Team Canada during the World Baseball Classic in Toronto, ON. Morneau was awarded the Tip O'Neill Award for the top Canadian in baseball in 2008 on April 16, 2009 before the Blue Jays-Twins game in Minnesota. Tom Valcke, CEO of the Canadian Baseball Hall of Fame made the presentation prior to the game. This was Morneau's second award, having previously won in 2006. Morneau reached 30 homers and 100 RBI again in 2009, but he had to miss the last three weeks of the season, with the Twins trying to chase down the Detroit Tigers for the AL Central title, because of a stress fracture in his back. Michael Cuddyer filled in admirably for him at first base during that stretch, and the Twins came out ahead by winning a one-game playoff over the Tigers.

On February 11, 2010, Morneau was one of the torchbearers on the penultimate day of the 2010 Olympic Torch Relay, on the eve of the opening of the 2010 Vancouver Winter Olympic Games. Although his fellow Vancouver native and National Basketball Association star Steve Nash was selected to be one of the final torchbearers in BC Place during the opening ceremonies the next day, Morneau missed out on that honor. He was having another outstanding season in 2010, hitting .345 with 18 homers and 56 RBI in 81 games, when he suffered a season-ending concussion on July 7. The Twins still managed to win a division title, but missed his bat in the postseason when they bowed out in three games against the New York Yankees in the ALDS. He was not cleared to return to action until March 8th of 2011, with spring training already well under way.

Morneau had his 1000th career base hit with an infield single on April 8, 2011 against Oakland, but this was a rare highlight in what was a very frustrating season for him and for the team. He made a first trip to the disabled list in April with a sore neck, then a second one on June 14th with a strained left wrist. In between, he was hitting .265 with 3 homers and 17 RBI, and the Twins, reeling from the absence of C Joe Mauer and 2B Tsuyoshi Nishioka in addition to his ailments, sank to the bottom of the Ameican League standings. While on his second DL stint, it was decided that he should undergo surgery for his pain in the neck, caused by a herniated disk fragment, a procedure that extended his absence from the line-up into August. Also of concern were his continued suffering from post-concussion symptoms, to a point that he told reporters in spring of 2012 that if those did not subside, he would have to contemplate retirement. "There comes a point you can only torture yourself so long. I don't think there will be a career if it's something I'm dealing with. That's the reality of the whole thing. I'm obviously not going to continue to mess around with this if it continues to be a problem." The problems did abate in 2012, however, and he played in 134 games, hitting .267 with 19 homers and 77 RBI, far from his numbers when he was an MVP contender, but still good for a 112 OPS+.

Still the Twins first baseman in 2013, he had one of his best days in years in the first game of a doubleheader against the Chicago White Sox on August 9th as he hit a grand slam off Nate Jones in the 7th inning and a solo homer off Ramon Troncoso in the 9th to key a 7-5 win. He finally showed some of his old power for the first time since his 2010 injury as he banged out 9 homers that month, then on August 31st was traded to the Pittsburgh Pirates in return for OF Alex Presley and a player to be named later. He was hitting .259 with 17 homers and 74 RBI in 127 games and was slated to become a free agent after the season. In 25 games for Pittsburgh, he hit .260 but with no homers and only 3 RBI. He hat a hit and a walk in the win over the Cincinnati Reds in the Wild Card Game, then went 6 for 20 with 4 runs scored as the Pirates lost to the St. Louis Cardinals in the NLDS. On October 5th, the Pirates sent P Duke Welker to the Twins to complete the trade, then changed their minds a few weeks later, re-acquiring Welker on November 19th and sending Kris Johnson to Minnesota instead. For his part, Morneau was a free agent and on December 13th signed a two-year deal with the Colorado Rockies, where he was set to replace a team legend, the recently retired Todd Helton.

Morneau made a wonderful comeback with the Rockies in 2014, winning the National League batting title with a .319 average. Ironically, two teammates hit better than him that season: Troy Tulowitzki at .340 and Michael Cuddyer at .332, but both saw their season shortened by injuries, failing to gather enough plate appearances to qualify for the title. In contrast, Justin was largely healthy, playing 135 games - he did miss some time with a stiff neck - and finished ahead of a pair of members of the Pittsburgh Pirates, both of whom had been his teammates the previous year, the surprising Josh Harrison at .315 and Andrew McCutchen at .314. Morneau also displayed good power, banging out 32 doubles and 17 homers and driving 82 runs in spite of being in the middle of a depleted line-up for most of the season. He was awarded the Tip O'Neill Award for the third time after the season. In 2015, injuries limited him to 49 games with the Rockies, but he maintained a good batting average, at .310, although he only hit 3 homers and collected 15 RBIs. In 2016, he moved to the Chicago White Sox and in another abbreviated season, hit .261 in 58 games, with 6 homers and 25 RBIs. He became a free agent after the season but was unable to find a team willing to sign him. He did not want to announce his retirement just yet, but had to accept then reality.

In January 2018 he rejoined the Twins, the team with which he was most associated during his career, to organize a press conference that made his retirement official. He was also offered a job as a special assistant to the General Manager, joining former teammates Torii Hunter, Michael Cuddyer and LaTroy Hawkins who were all also now working in the Twins' front office following their retirement. He also became a broadcaster, working as an analyst on local Twins television broadcasts.

He was inducted in the Canadian Baseball Hall of Fame in 2020.