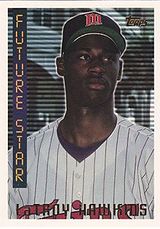 LaTroy Hawkins won a Pitching Triple Crown in the Midwest League in 1993 while pitching for the Fort Wayne Wizards. He led the league with a 2.06 ERA, 15 wins, and 179 strikeouts. He spent the first 9 seasons of his career with the Minnesota Twins, who had drafted him in the 7th round of the 1991 amateur draft. From 1995 to 1999, he was exclusively a starting pitcher: 98 of his 99 appearances over that stretch were in the role. Moved the bullpen at the start of the 2000 season, he never started another game afterwards in 15 more seasons.

Hawkins began the nomadic phase of his career in 2005. He was traded by the Cubs to the San Francisco Giants on May 28th for pitchers David Aardsma and Jerome Williams. He went 1-4 for each of the two teams that year, finishing at 2-8, 3.83 in 66 games. He was then traded by the Giants to the Baltimore Orioles on December 6th for P Steve Kline. He pitched for Baltimore in 2006, then moved to the Colorado Rockies as a free agent in 2007. That year, he had as chance to pitch in the World Series for the only time of his career, as the Rockies went on a late-season torrid streak to elbow their way into the playoffs, then won 7 straight games to reach the Fall Classic, where they were swept in four games by the Boston Red Sox. LaTroy was 2-5, 3.42 in 62 games during the regular season, and gave up a run in two innings in the Series, after three scoreless appearances in the first two rounds of postseason play. He pitched for the New York Yankees in 2008, but appeared to have reached the end of the line when he put up a 5.71 ERA in 33 games, prompting a trade to the Houston Astros at the trading deadline. However, he turned things right around with Houston, with an ERA of 0.43 in 24 games and followed that with a 2.13 mark in 65 games in 2009. 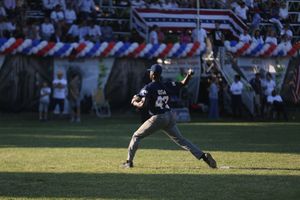 Pitching in Romania in 2017

Hawkins then pitched for the Milwaukee Brewers in 2010 and 2011; he was 0-3, 8.44 in 18 games the first year, but bounced back to a record of 3-1, 2.42 in 52 appearances the second. That first season in Milwaukee was the only time he experienced a physical ailment in his long career, as he had to undergo surgery to fix a frayed labrum. The Brewers reached the NLCS in 2011, with LaTroy contributing four scoreless relief appearances in the playoffs. He moved to the Los Angeles Angels of Anaheim in 2012 and continued to be effective, with a 3.64 ERA in 48 appearances. On July 3, 2013, pitching for the New York Mets - his 10th team - he passed Hall of Famer Cy Young with 906 career games pitched, putting him 22nd all-time in the category. It was a rare occasion for LaTroy to receive press coverage, as most of his long career has been spent away from the media glare. He was second on the active leaders' list, behind Mariano Rivera, but still over 100 appearances away from making the top 10. However, with him still pitching as well as ever at that point, getting into that rarefied company was still a possibility. Commenting on his huge number of appearances, he stated: "I can't believe that managers have sent me out there that many times, first of all. Who trusted me to go out there that many times? But it's a great accomplishment." Hawkins finished the season at 3-2, 2.93 and recorded 13 saves as he filled the Mets' closer's role late in the year. With Mariano Rivera having retired at the end of the season, Hawkins became the active major league leader in games pitched, with 943. On November 18th, he signed a one-year deal to return to Colorado, where he would be given a chance to be the team's closer in 2014. He was again outstanding in the role, converting 17 of 18 save opportunities with a 2.45 ERA in the first half. There was speculation that he would be moved the trading deadline, but he spent the entire year with the Rockies. He finished the year at 4-3, 3.31 with 23 saves in 57 games, ending the year with an even 1000 appearances on the mound in his career, only the 16th player to reach the milestone.

Now the oldest player in the major leagues, Hawkins announced before the start of spring training with Colorado in 2015 that the season would be his last one as an active player. While he stated that he sometimes had trouble relating to players from the younger generation, he explained that his longevity thus: "I have nice, easy mechanics. I'm not a drop, drive and a screamer. I don't have body parts going everywhere. My mechanics aren't violent." He lost his closer job quickly that season, after a few poor early-season performances. After getting the save against the Milwaukee Brewers in his first appearance of the season on April 7th, he gave up two 9th-inning runs to the Brewers the next day to blow a save opportunity, although he was credited with the win when the Rockies scored in the top of the 10th; in his next appearance on the 12th, he gave up a two-run homer to former teammate Dexter Fowler of the Chicago Cubs and was charged with a 6-5 loss. He then went on the disabled list at the end of the month with tendinitis in his right biceps and was reactivated on June 11th. Going back to a set-up man role, he pitched well after those early hiccups. He had a 3.63 ERA in 24 games, with a 2-1 record and 4 saves, when he was traded to the Toronto Blue Jays on July 28th, accompanying SS Troy Tulowitzki. The Rockies received SS Jose Reyes and Ps Miguel Castro, Jeff Hoffman and Jesus Tinoco in the blockbuster deal. When he recorded his first save for the Jays on August 5th against his old team, the Twins, it gave him a save against all 30 major league teams, making him the 13th pitcher to accomplish the feat. He went 1-0, 2.76 for the Blue Jays to finish at 3-1, 3.26 with 3 saves in 42 games. He did not do well in the postseason, however, as he allowed 7 earned runs in 1 2/3 innings. He confirmed his retirement after the season, hanging up his glove after 21 years and 1,042 games in the major leagues. He was 10th all-time on the career list for games pitched when he retired. He shares a record with three other pitchers by having recorded a win for 11 different teams; the others are Bartolo Colon, Mike Morgan and Ron Villone.

In October of 2013, Hawkins was on a flight from Dallas/Fort Worth to Santiago, Chile for a hunting trip, when he was asked by a stewardess for help in subduing an unruly passenger who was unhappy with his seat and threatening the on-board staff. Hawkins and his friends complied, quickly overpowering the passenger, but when he refused to calm down after he had regained his seat, the three had to pin the man down as the plane made an unscheduled landing in Lima, Peru, in order for him to be turned over to authorities. Once again, Hawkins had to help out in escorting the passenger out of the airplane, to ensure that he did not endanger staff or other passengers.

Hawkins coached for the Brazilian national team in the 2017 World Baseball Classic Qualifiers. He then became an analyst on Minnesota Twins telecasts. He became eligible for the Hall of Fame in 2021 and received just two votes to drop off the ballot. One of these came from USA Today national baseball correspondent bob Nightengale who explained that while he knew LaTroy did not have the numbers to merit induction in Cooperstown, he nonetheless voted for him as he was a man of tremendous character whose singular career deserved acknowledgement.