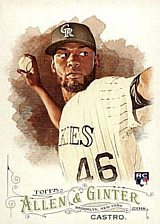 Pitcher Miguel Castro was signed out of the Dominican Republic by the Toronto Blue Jays to a $180,000 bonus in January 2012. A big, hard-throwing right-hander whose fastball once hit 103 mph on the radar gun, he also has an outstanding change-up, a rare quality among young fireballers. Miguel went 3-2, 4.87 for the DSL Blue Jays at age 17, then was back with the same team to start 2013. He was excellent in his second year at the level, with a record of 5-2, 1.36 and 71 strikeouts in 53 innings. The Jays brought him to the United States before the end of the year, and he made one appearance with the Bluefield Blue Jays and three with the GCL Blue Jays.

In 2014, he continued his progression to the ranks of top prospect by pitching at three levels, first with the Vancouver Canadians of the Northwest League, and then with the Lansing Lugnuts and Dunedin Blue Jays, both full-season Class A teams. His combined record was 8-3, 2.69; he made 15 starts in 16 appearances, pitching 80 1/3 innings during which he allowed only 50 hits and 30 walks and struck out 78 opponents. His good showing earned him an invitation to the Blue Jays major league spring training in 2015 and he continued to impress, to the point that the team brass was seriously considering taking him north to begin the season. Manager John Gibbons compared him to Dellin Betances, who had a breakout year as a set-up man for the New York Yankees the year before, while GM Alex Anthopoulos likened him to Yordano Ventura, coming off an outstanding rookie season with the Kansas City Royals.

He made the Jays' Opening Day roster, alongside another graduate of A ball, Roberto Osuna, and made his debut in the opener, April 6th, pitching a scoreless 1/3 innings in relief to complete a 6-1 win over the New York Yankees. He recorded his first save on April 9th, when he pitched a perfect 9th against the Yanks to preserve the maiden victory of Daniel Norris' career, 6-3. He briefly inherited the closer's mantle, recording 4 saves in April, but was not necessarily sharp. On May 4th, he was assigned to the AAA Buffalo Bisons, with his record 0-2, 4.38 in 13 games, as the Blue Jays brought up a couple of veterans to shore up the bullpen. He pitched 12 times for Buffalo, including 5 starts, going 1-2, 4.34 in only 18 2/3 innings; he also had a rehab stint with Dunedin. On July 28th, he was included in a blockbuster trade with the Colorado Rockies. The two marquee names were shortstops Jose Reyes and Troy Tulowitzki, who were swapped for each other, while Miguel and top minor league prospects Jeff Hoffman and Jesus Tinoco went to Colorado as LaTroy Hawkins headed the other way.

Castro did not stay long with the Rockies, pitching 5 times late in 2015 and another 19 games in 2016. He did not have much success, putting up a combined ERA of 7.20 in 20 innings, and Colorado gave up on him, even though he was just 21 and had a very live arm. On April 7, 2017, he was traded to the Baltimore Orioles for a player to be named later (minor league pitcher Jon Keller, whose career ended before he pitched a single game in the Rockies' system). He became a regular member of the O's bullpen, pitching 39 games that first year, 63 in 2018 and 65 in 2019. Those were very tough years for the Orioles, who finished in last place all three seasons and set a club record for futility in 2018. Castro was one of the better members of very weak pitching staffs, with an ERA of 3.53 the first year. It then rose to 3.96 and 4.66 the next two, but still well below the team ERA that was above 5.00 both years. He struggled a bit with his control in 2018, walking 50 batters while striking out 57, but was back to striking out 71 in 73 1/3 innings in 2019, when he also recorded his first two saves since his rookie year.

In January 2020, he was involved in a scary incident in the D.R., when he was robbed at gunpoint by two men who wanted to steal his jewelry; he would have been shot had the gun not jammed. He was not out in bad parts of town in the small hours of the morning either, but at a ballpark in broad daylight working with young players with big league dreams. That season with the Orioles he was 1-0 with 1 save in 16 games, recording 24 strikeouts in 15 2/3 innings. On August 31st, he was traded to the New York Mets in return for Kevin Smith. The Mets' bullpen was underperforming terribly and there was an opportunity for Castro to step into a front-line role. He pitched 10 times for the Mets, going 1-2, 4.00. He was with the Mets again in 2021 and had a good season as a middle reliever, going 3-4, 3.45 in 69 games, logging 70 1/3 innings during which he allowed 48 hits and 44 walks, and struck out 77.

It looked like he would return for a third season with the Mets in 2022, but just as spring training was winding down on April 3rd, he was traded across town to the New York Yankees in return for fellow reliever Joely Rodriguez.