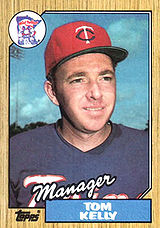 Tom Kelly began his playing career in the Seattle Pilots organization in 1968 and had a cup of coffee in the majors with the Minnesota Twins in 1975.

After his playing career ended, he was a minor league manager for five years and then a Twins coach from 1983 to 1986, when he became the team's manager. He remained the club's skipper through the 2001 season, winning the World Series twice during his tenure, in 1987 and 1991. After retiring as manager, Kelly continued to work with the Twins as a Special Assistant to the General Manager and as a special instructor in spring training. He suffered a mild stroke late in 2014, but was back in spring training with the Twins the following February.

The Twins retired Kelly's uniform number 10 at a ceremony before the game of September 8, 2012, as part of "Tom Kelly Day". In 2017, they announced they would erect a statue of him outside Target Field, alongside those of other great names in Twins history. The ceremony took place on July 21st.

Kelly's father Joe Kelly was a pitcher in the New York Giants system.