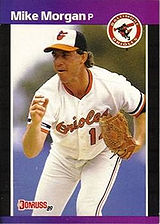 Mike Morgan set the modern record by playing with 12 different franchises, although he has since been passed by Octavio Dotel. Morgan also played in four different decades. He made his debut as an 18-year-old coming straight out of high school after being selected by the Oakland Athletics with the fourth overall pick of the 1978 amateur draft. The Atlanta Braves had selected college star Bob Horner with the first overall pick and planned to take him straight to the majors; A's owner Charlie O. Finley decided to beat them to the punch with his own phenom. Morgan pitched a complete game in a losing cause in his debut against the Baltimore Orioles on June 11, 1978, then lost his next two starts when he was battered around, and was sent down to the minors. His development was further hampered when the A's decided to give him another 13 starts at the major league level in 1979, after he began the year pitching well for the AAA Ogden A's, going 5-5, 3.48 in 13 starts. He was obviously not ready to face major league batters, however, as he went 2-10, 5.94 during that stint, then spent the next two seasons in the minors, where he should have been all along.

Before the 1981 season, Morgan was traded to the New York Yankees for infielder Fred Stanley, and he returned to the majors with the Yankees one year later, in 1982. He pitched a lot better than in his teenage years, but was still only 7-11, 4.37, with 67 walks against only 71 Ks. As poor as that strikeout ratio was, it was miles better than in his two seasons with the A's when his strikeout-to-walk ratio was an abysmal 17/58. After the season, he was included in a major deal with the Toronto Blue Jays that saw Dave Collins and Fred McGriff head to Canada alongside Morgan in return for Tom Dodd and Dale Murray. He only pitched 16 games, mainly in relief, for the Jays in 1983, going 0-3, then spent the entire 1984 season in AAA with the Syracuse Chiefs, where he went 13-11, 4.07. His four shutouts tied Jim Deshaies for the 1984 International League lead.

When the Jays dropped Morgan from their major league roster after the 1984 season, the Seattle Mariners pounced on him, picking him up in the 1984 Rule V draft. In 1985, he made a couple of early-season starts for the Mariners then lost the rest of the year to an arm injury. However, he spent the next two seasons in the Mariners' starting rotation, compiling poor won-loss records for a team heading nowhere, even though he did not pitch that badly. In 1986, he was 11-17, 4.53 and logged in over 200 innings for the first time in his career. He led the American League in losses, but otherwise was a decent pitcher; he improved to 12-17, 4.65 in 1987: because offensive numbers went up around the league, his ERA+ actually improved from 93 to 102 even if his ERA went up, and he again topped 200 innings, but his value seemed to be lost on the Mariners' front office, who traded him to the Baltimore Orioles for Ken Dixon after the season.

1988 was a tough year for the Orioles, who began the season with 21 straight losses and finished the season in last place in the AL East with 107 losses. Morgan began the season 0-5, was pulled from the starting rotation in early May, made a trip back to AAA Rochester in June, and then pitched only sporadically over the second half of the year. He ended the season with a record of 1-6, 5.43 in 22 games. After the season, the Orioles sent him to the Los Angeles Dodgers for OF Mike Devereaux; both players would bloom in their new surroundings.

In 1996, Morgan again pitched for two different teams. He was so-so for the Cardinals, putting up a record of 4-8, 5.24 in 18 starts and was released at the end of August. Picked up by the Cincinnati Reds, he put up a solid 2.30 ERA over 27 innings to earn another look in 1997. That year, he spent the season in the starting rotation, going 9-12 with a 4.78 ERA. His 162 innings pitched were the most since 1993, and he would not top that figure again in the rest of his career. He started 1998 with the Minnesota Twins after signing as a free agent, then on August 25 was traded to the Cubs to help with their pennant push. He had been 4-2 in 17 starts for the Twins, but only 0-1 with a 7.15 ERA in 5 starts for the Cubs, but finally pitched in the post-season in his 18th season in the majors. He was twice called on in relief against the Los Angeles Dodgers in the NLDS and did not give up anything in an inning and a third.

In 1999, Morgan was with the Texas Rangers starting 25 games in 34 overall appearances. In spite of pitching only 140 innings, he got a lot of decisions, finishing the season 13-10 in spite of a 6.24 ERA. By that point, the 40-year-old was known by the nickname "The Nomad" because of his constant travel, but although he had looked done with the Rangers, he managed to prolong his career by becoming a relief pitcher with the Arizona Diamondbacks. He spent three seasons in Arizona. In 2000, he was 5-5 with 5 saves in 60 games and over 100 innings out of the bullpen (he did make 4 starts), then in 2001 only had one decision - a win - in 31 games, including the last start of his career. More importantly, he pitched in all three rounds of the postseason and was at his best in the 2001 World Series as he tossed 4.2 scoreless innings and the D-Backs defeated the Yankees in 7 games to claim the first world championship in franchise history. He was back for another go-round in 2002 and pitched 28 games in the first three months before being sidelined by an injury. He came back to make the final appearance of his career on September 2, pitching 1.1 innings, giving up an unearned run in a 19-1 loss to the Dodgers. He made no other appearance on the mound, ending the season 1-1 with a 5.29 ERA, and was not on the D-Backs' roster in the postseason. He retired after the season, having pitched 22 years in the majors, over four decades.

Morgan has the lowest winning percentage of any pitcher with 400+ starts, a result of pitching many years with poor clubs, and of seeing a lot of action before he was ready for the major leagues. Overall, he went 141-186 in 597 games, 411 of them starts, with a 4.23 ERA (an ERA+ of 98). He compiled 46 complete games and 10 shutouts, and struck out 1403 batters in 2772.1 innings, against 938 walks. His longevity is a much better indicator of his overall talent than his winning percentage. He shares the all-time record for having recorded a win with 11 different teams; three other pitchers have done so as well: Bartolo Colon, LaTroy Hawkins and Ron Villone.