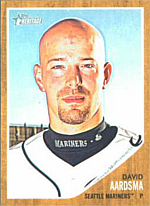 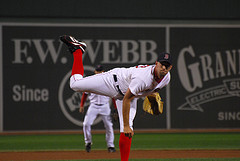 Pitcher David Aardsma played parts of eight seasons in the majors. He is perhaps best known for being first alphabetically in the list of all-time Major League Baseball players, preceding Hall of Famer Hank Aaron (through 2019).

Aardsma attended Penn State in his freshman year of college after graduating from Cherry Creek High School in 2000. He transferred to Rice in 2001, where he remained for the rest of his college tenure. With the Owls, he became a dominant closer and set school single-season and career save records. In the 2003 College World Series, he earned two wins and a save while striking out 15 of the 16 batters he faced, as Rice won its first national championship.

Aardsma was drafted in the first round (22nd overall) of the 2003 amateur draft by the San Francisco Giants. He was signed by scout Tom Korenek and sent to the Class A San Jose Giants, pitching to a 1.96 ERA while striking out 28 in 18 1/3 innings and notching 8 saves. Earning an invitation to spring training with the Giants in 2004, he again pitched well, posting a 2.08 ERA and striking out 6 in 8 2/3 innings. His talent earned him a spot on the Opening Day roster - in the 10 months since he was drafted he had skipped AA and AAA and gone straight to the majors. He made his debut one day after the season opener, pitching two innings, allowing three hits, and walking one. In his first 6 appearances, he posted a 1.80 ERA, but this success did not last. One day after giving up 2 runs in an inning on April 20th, he was sent down to the AAA Fresno Grizzlies. He split the remainder of the year between San Francisco, where he posted a 6.75 ERA in 11 games, and Fresno, where he was 6-4 with a 3.09 ERA and 11 saves.

The Giants tried to convert Aardsma into a starter in 2005 and he began the year with the AA Norwich Navigators, with whom he went 6-2 with a 2.93 ERA. On May 28th, he was traded to the Chicago Cubs, along with Jerome Williams, for LaTroy Hawkins. He spent the remainder of the season with the AA West Tenn Diamond Jaxx, going 4-1 with a 3.91 ERA and 2 saves in 33 games. He earned a spot in the Cubs bullpen in 2006, going 3-0 with a 4.08 ERA in 45 games. After the season, he was traded, this this time across town to the White Sox, with Carlos Vásquez for Neal Cotts. He split the 2007 season between the bigs, where he posted a 6.40 ERA in 25 games, and the AAA Charlotte Knights, with whom he notched 15 saves. He was traded yet again after the season, this time to the Boston Red Sox, for two minor leaguers. He pitched 45 games for the Red Sox in 2008, posting a 4-2 record and a 5.55 ERA. 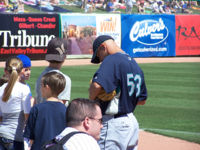 Involved in his fourth trade prior to the 2009 season, Aardsma went to the Seattle Mariners for minor leaguer Fabian Williamson. He finally showed the talent his previous teams had been looking for. David was installed as the M's closer and responded with 38 saves - he had not recorded a single save over his first four seasons - and a 2.52 ERA in 73 games. His other stats were consistent with those of an elite closer: in 71 1/3 innings, he gave up only 49 hits while striking out 80. He was back at it in 2010, saving another 31 games, but with a 3.44 ERA. He missed some time with an injury, pitching in only 53 games, and his record was 0-6. He missed the start of the 2011 season with a hip injury, then played only 5 games with the AAA Tacoma Rainiers on a rehab assignment before undergoing Tommy John surgery, ending his season. Aardsma was released following the season and signed a one-year deal with the New York Yankees on February 22, 2012. He only pitched one major league game that year, giving up a run in an inning of work against the Toronto Blue Jays on September 27th. He had only pitched 5 games in the minor leagues prior to that appearance.

Aardsma was released by the Yankees at the end of spring training in 2013 and signed with the Miami Marlins, who sent him to the minors. He went 1-0, 2.57 in 10 games for the New Orleans Zephyrs, then asked for his release to sign with the New York Mets. He put up a 1.12 ERA in 8 games for the Las Vegas 51s to get the call back to the majors on June 8, 2013. He was pressed into action that day and almost won his first game since 2009 when he pitched a scoreless top of the 12th inning against the Marlins. The Mets then put two men on in the bottom of the inning, but Daniel Murphy was thrown out at the plate on a great throw by Marcell Ozuna to end the frame. Shaun Marcum succeeded him on the mound and eventually lost the game, 2-1, in the 20th inning. In 43 games with the Mets, he was 2-2 with a 4.31 ERA.

Aardsma's travels continued when he signed with the Cleveland Indians prior to spring training in 2014. He was released at the end of camp and joined the St. Louis Cardinals organization, with a sterling record of 4-1, 1.46 and 11 saves for the Triple A Memphis Redbirds. After starting 2015 similarly strong in Triple A in the Los Angeles Dodgers organization (2.41 ERA, 18 saves), he opted out of his deal in June and caught on with the Atlanta Braves for his final big league action. In 33 games (30 2/3 innings), David was 1-1 with a 4.70 ERA. He wrapped his professional career with a brief stint in Triple A with the Toronto Blue Jays in 2016 and a stay with the Long Island Ducks of the Atlantic League in 2017. He officially announced his retirement in February 2018 when he joined the Blue Jays' front office as a coordinator of player development.

His younger sister, Amanda Aardsma, is an actress who formerly competed in the Miss Teen USA beauty pageant.