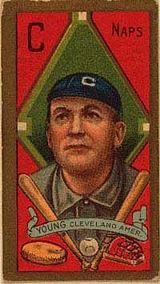 Cy Young was a workhorse pitcher who completed a mind-boggling 750 games in his career. As a result of this, he leads all-time for innings pitched (7354 2/3), wins (511), and losses (316). If you wanted a staff ace, you'd go for Walter Johnson, but if you wanted a pitcher who would eat up an insane amount of innings and still be solid doing it, you would want Denton True Young on your team. His ERA for pitching so many innings is respectable at 2.66, and he swung an ok bat considering that he was a pitcher: a .210 batting average, a .234 on-base percentage, a .282 slugging percentage, and a .492 OPS; he also holds the record for at bats by a pitcher (2960).

He pitched in both the National League, where he was most associated with the Cleveland Spiders, and the newly-formed American League. On May 5, 1904, playing for the Boston Americans, he pitched the first perfect game in American League history - and only the third in major league history - defeating the Philadelphia Athletics, 3-0. The perfect game came in the midst of a record streak of 24 hitless innings. It started on April 25th when he did not allow a hit over the last two innings of a start, continued with 7 hitless innings in relief on April 30th against the Washington Senators, then the perfect game, and finally the first six innings of his next start, against the Detroit Tigers on May 11th. That last game eventually went 15 innings before he won it, 1-0. The closest anyone has come to matching this record since then is the 21 innings pitched by Dennis Eckersley in 1977, around his only career no-hitter. Young also had a scoreless streak of 45 innings during that same span; that was also a record at the time, but it did not survive the season, as Doc White went 45 2/3 innings without giving up a run later that year.

He pitched his third no-hitter on June 30, 1908, at age 41 for the Boston team now known as the Red Sox. He barely missed throwing a second perfect game that day, as his only blemish was a walk to the game's lead-off batter, Harry Niles, in an 8-0 win over the New York Highlanders. He also had three hits and four RBIs that day; Wes Ferrell is the only other pitcher to have four RBIs while pitching a no-hitter. It was his final season for Boston, and he went 21-11, 1.26. He had another good season in 1909 after being traded to the Cleveland Naps, going 19-15, 2.26, before finishing below .500 in his final two years. In his final season in 1911, he was back in the Boston, but this time in the National League with the Boston Rustlers. In a much-circulated story, he claimed that he decided to hang up his glove when he was beaten, 1-0, by a brash young rookie named Grover Cleveland Alexander, who pitched a one-hitter against him. That game did take place, on September 22nd, but Cy pitched a few more times after that appearance, last coming to the mound on October 6th, facing the much-less heralded Eddie Dent of the Brooklyn Dodgers. He was knocked out of the box in the 7th when he gave up in succession a triple, four singles, and three doubles.

His nickname Cy is short for "cyclone," a reference to the speed of his fastball in his younger days: he was initially referred to as "Cyclone Young." As he aged, Young relied more on his curveball and other breaking pitches, in addition to his outstanding control.

A farm boy, he pitched semi-pro ball in Nebraska and Ohio, along with part of one minor league season, before coming to the majors.

Cy Young was the first man to pitch in the World Series, as he was the starting pitcher for the hometown Boston Americans in Game 1 of the 1903 World Series; he pitched a complete game loss that day, but would go on to win two games in the Series, as Boston defeated the Pittsburgh Pirates by five games to three.

Like many pitchers of his era, Cy was pressed into umpiring duty at one point as umpiring assignments were fluid and it happened often that the umpire did not show up for the game. In those cases, either a back-up catcher or a starting pitcher who was not active that day was called upon to be the umpire. In Young's case, he worked two National League games in 1896, and two American League games in 1903.

The Cy Young Award, Major League Baseball's annual distinction bestowed upon the best pitcher in each league, is named in his honor. 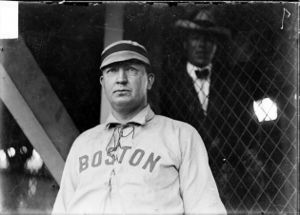 The stalwart oak of the pitching craft was old Cy Young. He is a product of the soil and a splendid line of pioneer ancestors put the power of a Samson into those massive shoulders and sinews of steel into that remarkable right arm.

A man of his mettle disdained a sore arm or the other chronic pitching complaints, and he had passed his forty-fifth milestone on the 1912 training trip of the Boston Nationals when he decided he had better surrender to old Father Time. But before Cy surrendered, he had pitched in twenty-two big league seasons and hung up a record of 511 victories, the only twirler to ever pass the 500 victory mark. In fact, Walter Johnson came the nearest to equaling Young's record, and he spent most of his career laboring on cellar-dwelling teams. Johnson's 417 wins still fell far short of Young's 511. (In the last 60 years, the only pitcher who even came relatively close was the rubber-armed Warren Spahn, with 363 wins).

Denton True Young was born on a farm near Gilmore, Ohio, on March 22, 1867, and he was passed twenty-three when he started his major league career. He pitched for rural teams in Ohio, and when he signed with Canton in 1890 he reported in his overalls. Canton later in the season sold him to the old Cleveland National League team for $500.

Cy left many a mark for future generations of pitchers to shoot at in addition to his 511 victories. He is the only pitcher who won over thirty victories in five different years. In eleven other seasons he won over twenty.

This record was later surpassed by Sandy Koufax, who pitched 4 no-hitters, and Nolan Ryan, who pitched 7 (Ryan also beat Cy Young's age record, no-hitting the Toronto Blue Jays on May 1, 1991 at the age of 44.)