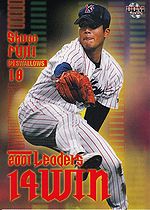 Shugo Fujii is a pitcher currently playing for the Yomiuri Giants of the Central League in Nippon Professional Baseball. He has been an All-Star twice - in 2001 and 2005.

Fujii began playing baseball in Little League in the second grade. While in high school, he was his team's ace and cleanup hitter. In 1995, he played in the spring Koshien Tournament.

While in college, he went 24-10 with a 1.91 ERA. He was named to a Tokyo Big Six University League Best Nine team as a sophomore. He was drafted in the second round in 1999.