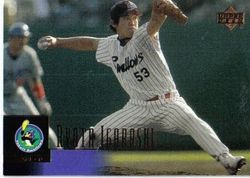 Ryota Igarashi was once the fastest pitcher in Nippon Pro Baseball. He signed a contract with the New York Mets for the 2010 season and pitched three seasons in the major leagues, with limited success.

Igarashi was a second-round draft pick of the Yakult Swallows in 1997. He threw a 6-inning perfect game in ni-gun on September 26, 1998; the contest was cut short due to rain.

The right-hander made 64 appearances in 2002 and was 8-2 with 4 saves and a 2.08 ERA. He held opponents to 49 hits in 78 innings and fanned 97. The lone negative was 8 wild pitches, leading the CL. He was again a CL All-Star while being used as a setup man for Shingo Takatsu.

When Takatsu left for the Chicago White Sox, the 24-year-old was handed the Swallows' closer job. Igarashi went 5-3 with 37 saves and a 2.66 ERA in 2004. He held opponents to a .210 average and struck out 86 in 74 1/3 IP. He led the CL in both saves and appearances (66). He made the All-Star team for the 4th time. He won the Fireman of the Year Award, which Takatsu had taken three times. Along with Hirotoshi Ishii, he formed the "Rocket Boys" bullpen, noted for their fastballs in the mid-90s. On June 3, he threw a 158 kph (98 mph) fastball, tying the Nippon Pro Baseball record for fastest pitch ever (held by Hideki Irabu and Kazuo Yamaguchi); Igarashi would hit that figure several more times in his career. The record didn't even last a year as Marc Kroon broke it in May of 2005.

A free agent after the season, Igarashi expressed interest in pitching in Major League Baseball. On December 17, 2009, he signed a two-year contract with the New York Mets. He was expected to become the set-up man for closer Francisco Rodriguez.

Ryota debuted for the Mets on April 8, 2010 relieving Jonathon Niese in the 7th inning against the Florida Marlins. He began by walking Cameron Maybin but got Hanley Ramirez to ground into a twin killing then got Jorge Cantu on a pop fly. Fellow Japanese rookie Hisanori Takahashi replaced him in the 8th.

Igarashi throws a forkball in addition to his fastball. His wife used to be a mascot girl for the Yokohama BayStars.