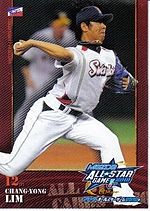 Sidearm pitcher Chang-yong Lim was a top closer in the Korea Baseball Organization for four years and a good starter for three. In 2008, he went to Japan to pitch and saved over 100 games there. Lim pitched for South Korea in the Olympics and World Baseball Classic, finishing second in each event. He reached the major leagues in 2013.

Lim had his lowest ERA in 2000, going 5-4 with 30 saves and a 1.52 ERA; he did not pitch enough innings to qualify for the ERA lead, though. He allowed only 58 hits in 88 1/3 IP while striking out 95. He allowed two runs in five innings of work in the 2000 Olympics and had no decisions as South Korea earned Bronze. He did not pitch in the semifinals or Gold Medal game.

Lim signed with the Tokyo Yakult Swallows for $800,000 over two years with a club option for a third year, a move that surprised Japanese baseball fans given Lim's prior three seasons.

Lim started off his Japanese career excellently, allowing no runs in his first nine innings and saving six contests. He was nicknamed "Mr. Zero" by the Japanese media for his efficacy. After 32 games, he had 20 saves and a 2.03 ERA; he finished the 2008 season 1-5 with 33 saves and a 3.00 ERA. He allowed a .275 average but only walked 9 in 51 innings. He was 5th in the league in saves. Yakult refused to allow Lim to participate in the 2008 Olympics for South Korea.

Lim was the South Korean closer in the 2009 World Baseball Classic, going 0-1 with 2 saves and a 3.38 ERA in five games. Only Francisco Rodríguez had more saves in the Classic. Lim retired all five batters to save South Korea's 1-0 win over Japan in the clubs' second match. He saved South Korea's second win over Japan as well and also closed out the semifinal win over Venezuela. In the championship game against Japan, Lim allowed a double to Ichiro Suzuki but nothing else in the 9th. In the 10th, he gave up his first runs of the tournament, costing South Korea the title. He began by giving up a Seiichi Uchikawa single, then allowed a one-out hit to Akinori Iwamura. He got Munenori Kawasaki to pop up, but Suzuki drove home both runs. He let two more batters reach before fanning Kenji Johjima but the damage had been done.

Lim was voted into the 2009 NPB All-Star Game, the first Korean ever picked by the fans; Seung-yeop Lee, Sung-min Cho, Dong-yol Sun and Dae-sung Koo had all made the game as managers' picks. He finished the 2009 season 5-4 with 28 saves and a 2.05 ERA. He was 9th in the Central League with 57 pitching appearances and was third in saves behind Hitoki Iwase and Katsuhiro Nagakawa. On May 15, he was timed at 100 mph, the second NPB pitcher to hit three digits on the radar gun, following Marc Kroon.

The Chicago Cubs took a chance on the rehabbing hurler in 2013, signing him to a minor league contract; the scouts were Min-kyu Sung, Steve Wilson and Paul Weaver. He did not appear in a game until late June, appearing for rehab stints for the AZL Cubs (2 R in 5 IP), Daytona Cubs (1 R in 5 IP), Tennessee Smokies (0 R in 1 IP) and Iowa Cubs (1 R in 11 1/3 IP), with a 1.61 ERA in 21 games. The Cubs had seen enough to give the veteran a September call-up.

In his major league debut, Chang-yong relieved Brooks Raley with one out in the top of the 7th and a 4-3 deficit against the Brewers. He walked Sean Halton and gave up a single to former Yakult teammate Norichika Aoki but then got Jean Segura hit into an inning-ening double play. Junior Lake batted for Lim in the bottom of the frame.