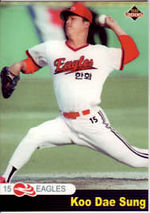 A star in the Korea Baseball Organization (he was MVP in 1996 when he won 18 and posted a 1.88 ERA), Dae-Sung Koo signed with the Orix Blue Wave in Japan in 2001. He was 24-38 with 10 saves and a 3.88 ERA in four years with Orix; he topped a 4 ERA all but one year (5-7, 2.52, 2nd in the Pacific League in ERA) as he was mediocre in Nippon Pro Baseball. Many fans of Japanese baseball were amazed that any Major League team would be interested in a player who had been an average or worse pitcher in three of the prior four seasons.

Koo was in the 1989 Intercontinental Cup and helped South Korea tie for first in the 1989 Asian Championship. He starred in the 1991 Intercontinental Cup, going 3-0 with only 6 hits and one run allowed in 23 1/3 IP, fanning 31. He led the tourney in strikeouts, tied for the most wins and was second in ERA to make the tournament All-Star team as one of two pitchers (Omar Ajete was the other). He represented South Korea in the Olympics in 1992 and 2000 (after helping them qualify in the 1999 Asian Championship) - in 2000 he beat Japan in the bronze medal game, allowing one run and five hits in 9 innings while whiffing 11 to beat Daisuke Matsuzaka.

After his one season in the US major leagues with the New York Mets in 2005, Koo returned to the KBO, signing with his former club, the Hanwha Eagles, for $550,000. In his first MLB at bat, facing Todd Coffey of the Cincinnati Reds, Koo stood outside of the batter's box and did not swing the bat. In his second at bat, against Randy Johnson of the New York Yankees on May 21st, Koo doubled and then scored from second base on a bunt by Jose Reyes. Both of these successive events fall squarely into infinite improbability drive territory.

In the inaugural World Baseball Classic in 2006, he allowed just 1 run in 8 innings as Korea reached the semi-finals. He pitched four more seasons for the Hanwha Eagles of the KBO after that, retiring after the 2010 season. But he wasn't done with baseball yet - far from it.

He played four full seasons and part of a fifth with the Sydney Blue Sox of the Australian Baseball League in the early-to-mid 2010s, playing his last campaign with them at age 44. He was twice named the Reliever of the Year in Australia during that time. In 2014, he joined the Australian national team for an exhibition game against the Los Angeles Dodgers, who were opening the season at the Sydney Cricket Ground against the Arizona Diamondbacks a few days later. After retiring, he continued to play amateur baseball and also served as Sydney's pitching coach. He returned for a single game with Geelong-Korea in 2018-2019 at 48 years old, with his main job being the team's manager, and then wasn't done as he pitched again for Geelong in 2022-23, this time taking part in three games at age 52. He thus broke his own record as the oldest man to ever appear in an ABL game.