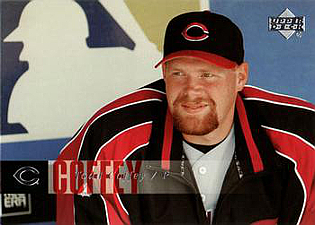 Todd Coffey was a 41st round draft pick made good, signed by Steve Kring and the Cincinnati Reds after his selection in the 1998 amateur draft. Known for sprinting full steam ahead from the bullpen to the mound, Coffey was a situational right-hander and spot closer in eight big league seasons, seeing his greatest successes with the Reds and Milwaukee Brewers. He pitched an impressive 81 times for Cincinnati in 2006, saving 8 games with a 3.58 ERA. In 2009, he did his finest work, finishing 4-4 with a 2.90 ERA and 2 saves in 78 games out of the Brew Crew pen.

Coffey had Tommy John surgery twice, the second procedure (in 2012) ultimately ending his big league career. He is featured prominently in Jeff Passan's book The Arm.