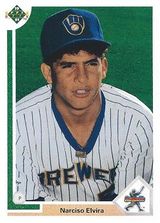 Narciso Elvira spent just a month in the majors but was 78-41 in the Mexican League from 1986-2004. In 1999, he became just the second Mexican League pitcher with two no-hitters in a year, following Chet Brewer by six decades. Elvira went 1-1 with a 0.82 for Mexico in the 1999 Pan American Games, finishing fourth in the tournament in ERA. His only major league time came with the Milwaukee Brewers in 1990.

His brother is Abraham Elvira.

In June 2015, he was kidnapped and wasn't rescued until 23 days later when police found him chained to a tree. In January 2020, he was shot and killed, alongside his 20-year-old son in an attack attributed to criminal gangs. He was a large landowner, with a farm employing over 100 persons, which made him a target in a state racked by gang violence. However, he did not want to leave, and he and his son Gustavo were driving on a rural road when they were ambushed by armed men. They tried to flee on foot but were shot down, according to eyewitnesses.

Elvira was the third member of the 1990 Brewers to be shot to death following Gus Polidor in 1995 and Darryl Hamilton in 2015.