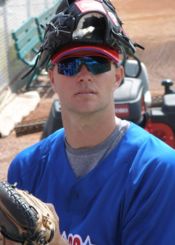 "Mad Dog" Ryan Madson lived up to his name on July 25, 2006, when, pitching for the Philadelphia Phillies, he threw four wild pitches in the 3rd inning against the Arizona Diamondbacks, tying the record for most wild pitches in an inning. Previously in his major league career, he has thrown a wild pitch about once every ten innings.

Madson, a 6' 6" player who nevertheless supposedly weighed only 180 pounds when he made his major league debut, spent the first 14 years of his professional career in the Philadelphia Phillies organization after being drafted in the 9th round in 1998. He moved from Martinsville in the Appalachian League in 1998 to Batavia in Single A in 1999 (where he threw 10 wild pitches in 87 innings), to Piedmont in Single A in 2000, to Clearwater in Single A in 2001, to Reading in Double A in 2002, to Scranton/Wilkes-Barre in Triple A in 2003 when he was 23 years old.

In 2005, his ERA wasn't quite as impressive, at 4.14 (completely in relief), as he gave up more home runs per 9 innings than previously. In 2006, the Phillies used him mostly as a starter. He had thrown four wild pitches the entire season prior to the inning in which he threw four more. His ERA was over 6.00 at the end of July, at which point he was moved out of the starting rotation and sent back to the bullpen and pitched somewhat better. He was exclusively a reliever in 2007, but was shut down after only 38 games during which he had put up a solid 3.05 ERA; he thus missed the Phillies' first trip to the postseason since 1993.

Madson had the best season of his career in 2008, serving as the primary set-up man for closer Brad Lidge. He pitched 76 games in relief, for a total of 82 2/3 innings (one of the highest in all of baseball), once again posting a 3.05 ERA and striking out 67 opposition batters. He was almost untouchable in the second half, when the Phillies surged to their second consecutive NL East title. He won a game in the 2008 NLCS, during which he pitched five scoreless innings in four games against the Los Angeles Dodgers, and made four more appearances in the World Series, giving up 2 runs in 3 2/3 innings to the Tampa Bay Rays. He gave up a game-tying home run to Rocco Baldelli in the 7th inning of Game 5 but did not figure in the decision.

Following the 2011 season in which he recorded 32 saves, Madson signed with the Cincinnati Reds for the 2012 season but ruptured his ulnar collateral ligament in spring training and missed the entire year following Tommy John surgery. He signed with the Los Angeles Angels of Anaheim for 2013 but pitched only one minor league inning in May and was released on August 5th. While the Tommy John procedure had become almost routine in recent years, Madson was one of the cases which served to remind observers that it was still a gamble. He never regained full strength after his surgery. He was again pitching in pain, and realized that he had hurt his elbow while because he had altered his mechanics prior to the injury. He had to have that injury tended to and rebuilt his pitching motion in order to regain the ability to throw heat pain-free.

In 2015, after a long and arduous journey and more than three years removed from his last major league appearance, he signed with the Kansas City Royals hoping to make it back. And make it back he did, in very impressive fashion too. He pitched 68 times out of the Royals' bullpen, going 1-2 with 3 saves and a sparkling 2.18 ERA. In 63 1/3 innings, he walked only 14 batters while striking out 58. he pitched 9 times as the Royals went all the way to the second World Series championship in team history. While he gave up 5 runs in 5 13 innings in the first two rounds of the postseason, he was credited with a win in Game 4 of the Division Series against the Houston Astros on October 12th, although it was far from a pretty outing. He came in in the 7th with Houston leading, 3-2, and a man on with no one out, and not only did he allow that inherited runner to score, but gave up two runs on his own on back-to-back homers by Carlos Correa and Colby Rasmus to increase the deficit to 5-2 before recording the final out with two runners in scoring position. The Royals seemed on the brink of elimination, but they mounted a tremendous five-run comeback in the top of the 8th, then scored twice more in the 9th, to record a 9-6 win that was credited to Ryan. He was a lot better in the World Series against the New York Mets, as he did not allow a run in his three appearances and on October 31st, was given credit for Kansas City's Game 4 win when he pitched a perfect 7th inning with the Royals trailing 3-2, and was the beneficiary of a three-run rally in the 8th that turned the tide of the game.

He signed a free agent contract with the Oakland Athletics before the 2016 season and was installed as the team's closer. He recorded 30 saves while going 6-7, 3.62 in 63 outings for a team that was out of the running from the get-go. In 2017, he was moved to set-up man and had an excellent first half for the A's, going 2-4, 2.06, with 1 save and 14 holds in 40 appearances. He struck out 39 batters in 39 1/3 innings. On July 16h, the Washington Nationals, desperate to solidify a shaky bullpen, acquired him and fellow reliever Sean Doolittle in return for Blake Treinen and two prospects, Jesus Luzardo and Sheldon Neuse.

In August of 2018 he was involved in a couple of controversial plays. On August 4th, he hit Cincinnati Reds 1B Joey Votto with a 96 mph fastball on the right knee. The Reds were convinced this was intentional and asked for Madson to be punished, especially after Votto had to go on the disabled list ten days later with the lingering effects of the injury, but in vain. On August 12th, he was trying to close out a 3-0 lead over the Chicago Cubs at Wrigley Field in place of injured closer Sean Doolittle after a great performance by Max Scherzer. However, he managed to load the bases with a walk and two more hit batsmen and with two outs, he surrendered a game-ending pinch-hit grand slam to David Bote, one of the very few times in baseball history a game had been lost in such dramatic circumstances. On August 31st, he was traded to the Los Angeles Dodgers in return for minor leaguer Andrew Istler. He was 5-5, 4.08 with 5 saves in 69 games. Madson set a dubious record in the 2018 World Series when he allowed seven inherited runners to score as the Dodgers lost the series in five games to the Boston Red Sox. He became a free agent after the series and retired.

He is the nephew of Steve Barr, who threw 7 wild pitches in his career of 84 innings.