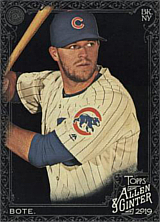 David Bote made his major league debut in his hometown of Denver, CO on April 21, 2018, playing for the Chicago Cubs against the Colorado Rockies. He had been called up earlier that day when Ben Zobrist was placed on the disabled list. Bote started at third base and batted eighth, and in his first career at-bat, collected a double off Tyler Anderson. It was one of the few highlights for Chicago that night, as they lost the game, 5-2. On August 12th, he had another highlight in a nationally-televised game against the Washington Nationals at Wrigley Field. The Cubs went into the bottom of the 9th trailing, 3-0, after a great performance by Max Scherzer, but substitute closer Ryan Madson loaded the bases with two outs with an infield single and two hit batsmen. Bote pinch-hit for pitcher Justin Wilson and hit a walk-off grand slam to give the Cubs an unlikely, 4-3 win. He seemingly took a liking to being a hero, as he did it again on August 24th, this time in the 10th inning in a 3-2 win over the Cincinnati Reds; his victim was Raisel Iglesias. He was getting regular playing time as a result of third baseman Kris Bryant being on the disabled list. In 74 games, he hit .239 with 6 homers and 33 RBI. He took an 0-for in the Cubs' loss to the Colorado Rockies in the Wild Card Game on October 2nd, starting at third base with Bryant in left. He struck out in both of his at-bats before giving way to pinch-hitter Tommy La Stella in the bottom of the 7th.

Bote made the Cubs' Opening Day roster in 2019 and was slated to see most of his action at second base at the start of the year, with shortstop Addison Russell serving a suspension for domestic violence and second baseman Javier Baez sliding over to short. On April 3rd, the Cubs gave him a vote of confidence by signing him to a five-year contract extension worth $24 million through 2024. He had a great game on June 5th, in a 9-8 win over the Colorado Rockies, as he homered and drove in 7 runs. He was having an excellent season, as he had 11 doubles, 7 homers and 30 RBI in 52 games. Overall, he finished .257/.362/.422 with 11 homers, 41 RBI, and 47 runs scored in 127 games.