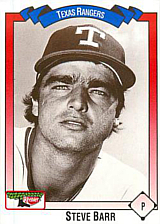 Steve Barr is the uncle of Ryan Madson. He was signed out of high school by the Boston Red Sox and scout Joe Stephenson after being the team's 7th-round selection in the 1969 amateur draft. In his sixth season in the minors, he led the Eastern League in wins with a record of 16-8, 2.45, for the Bristol Red Sox in 1974 and was called to Boston at the end of the year, making his major league debut as the Sox's starting pitcher on the next-to-last day of the season, October 1, 1974. Facing the Cleveland Indians, after a 36-day lay-off since his last appearance in AA, he had a good 1st inning, then walked John Ellis to lead off the 2nd, then things went downhill quickly, with a wild pitch, three singles and a pair of walks. He gave up three runs, but it could have been a lot worse, and he settled down to earn a complete game victory with Boston's 7-4 win.

Barr started the 1975 season back in the minors, with the AAA Pawtucket Red Sox, but was called back to Boston on July 1st, following an injury to Dick Pole, who had been hit in the face by a batted ball. He made a relief appearance against the Baltimore Orioles the day of his return, then got a start on July 5th, again facing Cleveland. This time, he was bombed as he surrendered a 2nd-inning grand slam to Buddy Bell and was replaced by Jim Burton before the frame ended. He got the chance to make one more start, against the Texas Rangers on July 10th, but could not get out of the 5th inning with a 7-3 lead and was replaced by Reggie Cleveland. He was sent down sporting a 2.57 ERA, but that was highly misleading, as 7 of the 9 runs he had given up in his 7 innings of work were unearned. Steve finished the season at Pawtucket with a record of 6-12, 2.92 in 23 games.

Before the 1976 season, Barr was traded to the Texas Rangers, along with Juan Beniquez and Craig Skok, in return for future Hall of Famer Ferguson Jenkins. He started the season in Texas and got his best chance to pitch in the majors with 20 appearances, including 10 starts. He recorded 3 complete games and gave up 70 hits in 67 2/3 innings, but what killed him was his lack of control - 44 walks against only 27 strikeouts. That led to a record of 2-6 and a 5.59 ERA. The season started well enough, with a complete game 3-1 win over the Oakland Athletics in his first start on April 13th, but things went downhill afterwards and while he spent the entire season in the big leagues, he was used sparingly after August 1st, pitching only 9 2/3 innings over the season's last two months.

He was left exposed in the expansion draft and was selected by the newly-formed Seattle Mariners with one of their last picks. He failed to make the M's staff in 1977 and was loaned to the Omaha Royals, as the M's did not have a proper AAA affiliate yet. He went 4-8, 6.17 in 17 games, and the M's had to move him the Toledo Mud Hens, the Indians top farm club, in mid-August, probably because the Kansas City Royals, in a pennant race in the AL West could no longer afford to give up a starting slot in their top farm team to such an underperforming pitcher. With Toledo, he did better, going 3-1, 4.00 in 7 games. Apparently the Indians liked what they had seen enough to formally acquire Steve (although for future considerations only) and invited him to spring training in 1978. He spent the season with the team's new AAA affiliate, the Portland Beavers, where he went 11-7 with a bloated 5.77 ERA in 28 games. He retired after the season and soon moved to Florida where he started an electrical contracting business. He continued to pitch in amateur leagues, but gave it up after he was hit hard in the thigh by a batted ball, convincing him he was getting a bit old to risk serious injury on the diamond. He had to have replacement surgery on both hips in later years but continued to enjoy fishing and riding his motorcycle while operating his business.