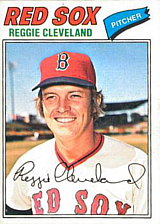 After two big league trials, he became a starting pitcher in 1971 with the St. Louis Cardinals, joining a rotation including Bob Gibson, Steve Carlton, Jerry Reuss. He won 12 games, part of a seven year stretch of double digit victories, and was named The Sporting News National League Rookie Pitcher of the Year. Reggie moved to the Boston Red Sox in 1974 and was was a valuable member of their rotation in 1975, serving as a swingman and posting a 13-9 record as the BoSox won the pennant. Cleveland finished his career with the Milwaukee Brewers in the strike-shortened 1981 season, having gone 105-106 with a 4.01 ERA in 428 games. In 1990, Reggie pitched in the Senior Professional Baseball Association for the Florida Tropics, going 2-3 in 6 games before the league folded. He was a coach with the Medicine Hat Blue Jays in 1991, St. Catharines Blue Jays in 1992-1993, and Hagerstown Suns in 1994-1995.

ESPN columnist Bill Simmons created a list of athletes whose names are incongruent with their race: that is, white players with black-sounding names and vice versa. He called players on his list The Reggie Cleveland All-Stars[1].