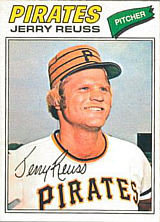 Jerry Reuss was drafted and played for his hometown team. He pitched Ritenour High School in St. Louis, MO to the Missouri state championships in both 1966 and 1967. He was then drafted by the Cardinals in the second round of the 1967 amateur draft.

In case his baseball career went awry, Jerry started studying veterinary medicine at the University of California, Santa Barbara in 1974 but his exams conflicted with the start of spring training in 1975. He hurried off to join the team when he received word that the Pittsburgh Pirates were fining him $100 per day.

Jerry Reuss is one of a handful of players to play in four decades, pitching for the Buffalo Bisons of the International League in 1990 so that he could get a September call-up with the Pittsburgh Pirates.

An article in the July 16, 2006 Los Angeles Times about Reuss indicates that he is an enthusiastic sports photographer, taking artistic photos of other players, and he also collects vintage photos of himself playing for various teams. The article is accompanied by a photo of Reuss as a child attending a Cardinals game in 1960.

His son, Jason Reuss, played two seasons in the Houston Astros organization. Jerry Reuss made his first baseball card appearance in the 1970 Topps set. Jerry's autobiography, Bring In The Right Hander, was published in 2014.