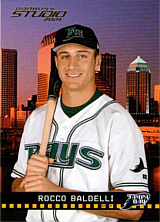 “Some players have a magnetism that you can't measure or explain. It's something that fans, teammates, even opponents respect. Rocco has it.” - Chuck LaMar

Rocco Baldelli graduated from Bishop Hendricken High School, in Warwick, Rhode Island. He was an All-State selection in baseball, volleyball, basketball and outdoor track, and finished in the top 10% of his graduating class academically. He was offered and accepted a baseball scholarship to Wake Forest University but signed a contract with the Tampa Bay Devil Rays after being taken with the 6th overall selection of the 2000 amateur draft. After a couple of so-so years in the minors, he blossomed in 2002, hitting a combined .331 with 19 homers and 71 RBI at three levels of the Devil Rays' organization. This earned him Baseball America's Minor League Player of the Year honors.

He made the Devil Rays' Opening Day lineup in 2003, being the starting center fielder at age 21. His first game came against the Boston Red Sox; he lined a double down the third base line off Pedro Martinez for his first hit. He went on to reach base safely in his first 24 career games, a major league record. After his first two years with the Devil Rays, he appeared headed for superstardom: he hit .289 with 78 RBI in 156 games in 2003 and was named to the 2003 Topps All-Star Rookie Team, then followed with a .280 batting average, 16 homers and 74 RBI in 2004. Sadly, almost nothing went right from then on.

Baldelli missed the entire 2005 season with a shoulder injury, requiring Tommy John surgery. He played 92 games in 2006, putting up a great batting line of .302/.339/.533, but needed knee reconstruction surgery after the season. Starting in 2007, he began suffering from a puzzling medical condition that sapped his strength and stamina. First (wrongly) diagnosed to be suffering from mitochondrial disease, he did not respond well to treatments and was limited to 35 games, during which he hit a weak .204 in 2007. The following year, the condition was correctly identified as a form of channelopathy, which allowed for better treatment, although the overall debilitating effects of the disease could not be completely reversed, and treatments kept him off the field for long stretches of time. In 2008, he was limited to 28 games as the renamed Rays reached the postseason for the first time in franchise history. He hit .263 in 80 at-bats and was used in all three rounds of the postseason, hitting a homer in the ALCS against the Boston Red Sox, and another against Ryan Madson of the Philadelphia Phillies in the 6th inning of Game 5 in the World Series. That blast came when the game was resumed two days after being suspended in the 6th inning on October 27, tying the game at 3-all. The Phillies then scored what would prove to be the Series-winning run in the bottom of the frame.

In 2009, Baldelli signed as a free agent with his "hometown" team, the Red Sox, as a backup outfielder and got into 62 games, hitting .253 with 7 homers and 23 RBI. He did not play in the postseason and became a free agent again after the season. Following more treatments, he signed back with Tampa Bay in July 2010. He was back in the bigs in September, hitting a homer in his first at-bat of the season, and went on to collect 5 hits in 24 at-bats as the Rays edged the New York Yankees for the AL East title. He was hitless in three at-bats in the ALDS loss to the Texas Rangers, but could only get into one game as he was affected by severe cramps. He later explained that he felt terrible about letting his teammates down by being unable to help during these crucial games.

Realizing that he would never regain the top physical condition needed to play in the bigs, Baldelli announced his retirement at age 29 on January 26, 2011, adding that he had accepted a position in the Rays' front office, with duties related to scouting and player development. In 2015, he moved back to the field as first base coach for the Rays. After four seasons as Rays coach. he was named manager of the Minnesota Twins for the 2019 season, replacing franchise legend Paul Molitor. At 37, he was the youngest skipper in the majors for 2019. In his maiden voyage, the Twins won 101 games and an AL Central crown, bowing to the New York Yankees in the ALDS. He was named the winner of the AL Manager of the Year Award in recognition of his excellent work, although it was a very close vote and he barely edged out Aaron Boone of the Yankees. He became the youngest person to win the award, a year younger than Tony LaRussa was when he won it for the first time.